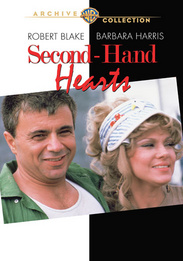 Barbara Harris (Nashville) cons Robert Blake (Baretta) into a marriage of inconvenience in this offbeat romantic comedy from Oscar -winning* director Hal Ashby (Coming Home). A honkytonk waitress in Texas, Dinette Dusty (Harris) desperately misses her children. Forced to board them with her late husband's parents, she finds the means to get them back when Loyal Muke (Blake) stumbles into the bar. Plying the boozy drifter with drinks, Dinette suggests they get hitched and become the children's new guardians. Sobering up to a wife and three kids, Loyal drives them west in search of an exit, while Dinette keeps her eyes on the road ahead to make sure they don't get ditched. *Film Editing, In the Heat of the Night, 1967