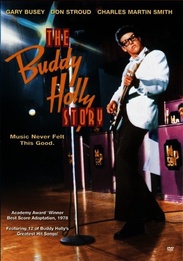 Gary Busey gives an electrifying, Oscar(r) nominated performance (Best Actor-1978) as Buddy Holly, the musical genius from Lubbock, Texas, who changed the tune of rock n' roll history. With a groundbreaking combination of country music and rhythm and blues, Buddy Holly and the Crickets (Don Stroud, Charles Martin Smith) catapulted to national stardom in just three short years with such hits as "That'll Be the Day," "It's So Easy," and "Peggy Sue." By the age of 22, Holly had it all: chart-topping singles, a beautiful wife, and international acclaim until tragedy ended a brilliant career but not his music. In an Academy Award(r) - winning score adaptation, Busey sings Holly's greatest hits in thisdynamic tribute to one of the most influential rock n' rollers of all time and the legacy he left behind.