Wings of the Navy 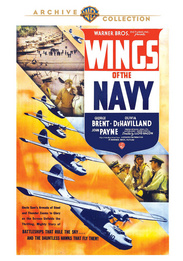 Biplanes flying in formation past the Washington Monument. A flotilla of seaplanes rising majestically off the surface of the Atlantic. Flyboys loop-de-looping their crafts through the wild blue yonder. A power dive that goes terrifyingly wrong. Wings of the Navy's story concerns two pilot brothers (George Brent and john Payne) who fall for the same girl (Olivia de Havilland, in the first of five films she would appear in during 1939, including Gone With the Wind), but the film is most memorable for its thrilling, you-are-there scenes of aerial glory. With war clouds gathering in Europe, many Americans looked anxiously to their own nation's military readiness. "For all the world to witness that America will not be unprepared!" declared the films advertising -- and backed it up with bravura footage shot at Pensacola Naval Station in Florida and North Island Naval Station at Coronado, California.