Dancer In The Dark 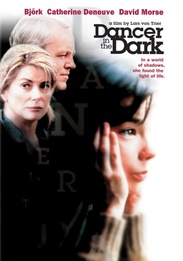 Director Lars von Trier (Breaking the Waves) delivers a provocative mix of drama and musical theater in this acclaimed movie that won 2000 Cannes Film Festival Best Picture and Best Actress honors (for lead actress Bjork). Rural factory worker Selma (Bjork) is a single mother losing her eyesight from a hereditary disease. To protect her 10-year-old son from the same fate, Selma saves money to get him an operation. At night, Selma escapes into a world where "nothing dreadful ever happens," rehearsing a production of The Sound of Music with her best friend (Catherine Deneuve). But when a neighbor (David Morse) betrays her trust, Selma's life unravels -- and the lines between reality and fantasy blur. Peter Stormare and Joel Grey also star in this trailblazing concoction that will make you cry at the same time it makes your heart sing.