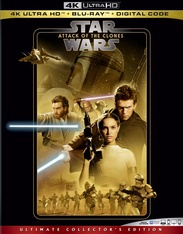 Ten years after the Trade Federation's hostilities against Naboo, Queen Amidala has traded in her crown for a seat on the Galactic Senate. The Senate faces a crucial vote on the creation of an army for the Republic to help curb a growing separatist movement headed by Count Dooku, an ex-Jedi.

An assassination attempt on Padme's life brings Anakin Skywalker and Obi-Wan Kenobi back into her life as her protectors. While Anakin stays with Padme, Obi-Wan seeks out the root of the assassination attempt and discovers a massive Clone Army that is being constructed from the DNA of a bounty hunter. Meanwhile, Anakin and Padme discover that their feelings for one another have grown in the last ten years.