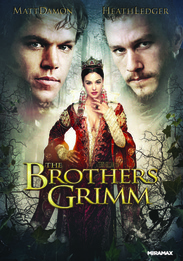 Brothers Jake and Will Grimm, renowned collectors of folklore, have made a career out of traveling from village to village pretending to rid them of enchanted creatures. Their bluff is called, however, when they are forced by Napoleon's French government to investigate a haunted forest where girls have been disappearing mysteriously.

What they discover leads to a series of adventures involving an actual evil (and immortal) sorceress that mirrors that of mythology and the fables that the Brothers Grimm would eventually become famous for.