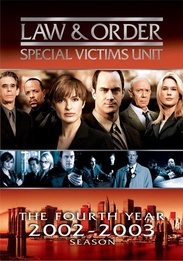 Burst onto the scene of the crime with all 25 engaging episodes of Law & Order: Special Victims Unit - The Fourth Year! Recipient of 15 Primetime Emmy® nominations, including a win for outstanding Lead Actress in a Drama Series (Mariska Hargitay) and a nomination for Outstanding Lead Actor in a Drama Series (Christopher Meloni), this powerful and intelligent detective series captivates fans like nothing else on TV. Join an elite squad of NYPD detectives who investigate sexually based crimes ripped from today's headlines. Along for the stakeout are such compelling guest stars as Barbara Barrie (in her Primetime Emmy®-nominated role), Judith Light, Pam Grier, Sherilyn Fenn and more! It's a must-have for every fan of the Law & Order series!