The Year Without A Santa Claus 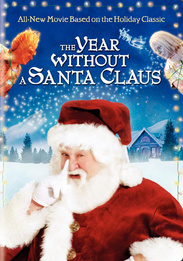 When his devious head elf, Sparky (Kattan), tells him that he must "keep up with the times" no matter how materialistic Santa Claus (Goodman) resists, fearing that the holiday has become far too commercial. Convinced that no one believes in him anymore and that people have forgotten the real meaning of Christmas, Santa decides to take the year off and not deliver any gifts, much to the dismay of his two closest elves, Jingle (Suplee) and Jangle (Griffin). When Santa tells them that he doesn't think there are any children left who still care about the true spirit of Christmas, the two elves decide to prove him wrong. But their efforts are complicated by Heatmiser and Snowmiser, the two feuding sons of Mother Nature (Kane), whose help Jingle and Jangle will need if they want to save Christmas.