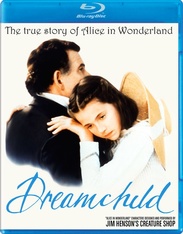 The magnificent Ian Holm (The Homecoming, Alien) is renowned childrens author Lewis Carroll in this poignant fantasy-drama set in 1930s New York and populated by the fabulous special-effects creatures of Muppet master Jim Henson. To help celebrate the 100th anniversary of Lewis Carrolls birth, the real-life Alice in Wonderland80-year-old Alice Hargreaves (Coral Browne, The Killing of Sister George)is baffled by her enormous public popularity. As she comes to terms with Americas Alice Mania, she returns in her thoughts and dreams to her idyllic childhood, in the England of the mid-1800s. In a wondrous blend of fantasy and reality, she confronts the unsettling memories of her pastand the strangely repressed Reverend Dodgson (a.k.a. Lewis Carroll), whose powerful affection for Alice surfaced in his writing to create one of the worlds most beloved literary classics. Scripted by Dennis Potter (Gorky Park) and co-starring Peter Gallagher (Summer Lovers), Dreamchild is a delightfully unique and inspiring film for all ages.