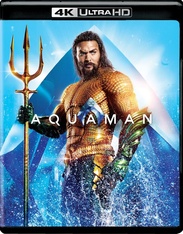 From Warner Bros. Pictures and director James Wan comes an action-packed adventure that spans the vast, visually breathtaking underwater world of the seven seas, Aquaman, starring Jason Momoa in the title role. The film reveals the origin story of half-human, half-Atlantean Arthur Curry and takes him on the journey of his lifetimeâone that will not only force him to face who he really is, but to discover if he is worthy of who he was born to be... a king.

Rated PG-13 for sequences of sci-fi violence and action, and for some language.