Richard Kelly's 'The Box' looks like a fun game

The Box is different from Kelly's earlier works. For one thing, it's more mainstream. He calls the project his "first grown-up film." USA Today provides this description of the film:

Its plot hook is inspired by a 1986 Twilight Zone episode that haunted Kelly as a kid: A couple (Cameron Diaz and James Marsden) open their door to find a box containing a button. If they push it, they will receive $1 million. The catch? Someone they don't know will die.

The film co-stars seasoned vet Frank Langella as the guy who delivers the strange box to the couple. He provides a very appropriate summation of Kelly: "Richard is in a league of his own. He has sort of an extraterrestrial creature running around in his head. That is what Steven Spielberg was like as a young boy."

I guess it's a little backhanded to call Kelly a little boy but I think Richard would be fine with any Spielberg comparison.

Also, I know this movie is supposed to be incredibly tense but this first photo has me laughing. The way James and Cameron are sitting at the table, it looks like they're playing a board game with a pop-o-matic dice bubble. You know, a dice-roller like the thing from the Trouble game. And is that Monopoly money in Marsden's hand?

No word yet on a release date for The Box. Richard Kelly's Southland Tales comes to DVD on Mar. 18. 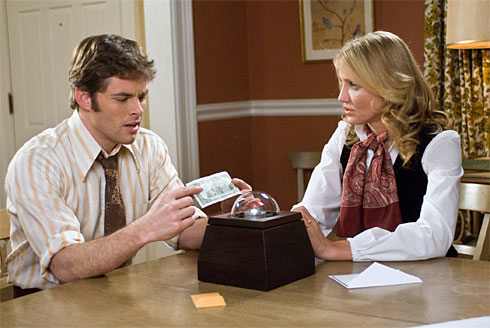