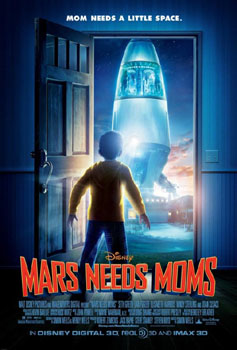 One week in and already Movie Trailer Season is off to a rip-roaring start. This week, with the holiday and all, we had to get an early start on our roundup, but I think you'll agree that we've got some interesting movies to check out.

The fist one out of the gate is Mars Needs Moms from Disney. It's an photo-realistic animated movie along the style of The Polar Express and it seems that the technology hasn't come a long way since 2004. I'm sorry, but this style of animation creeps me out.

As you'll see from the trailer below from Yahoo! Movies, the early part of the trailer when they are still on Earth just looks bizarre to me. Of course, most of the action of the movie is carried out in space and on Mars and the animation style actually lends itself for otherworldly subjects, so perahaps, I'm being rash in my judgment.

I will say that I do dig their one-sheet poster (right) as it's clearly an homage to the classic Sci-Fi film Close Encounters Of The Third Kind. Mars Needs Moms blasts off from theaters on March 11, 2011. What do you think of the trailer?

Speaking of movies that are clearly homages, The Lincoln Lawyer looks to be a grittier, urban take on Primal Fear. At least, that's what the trailer says to me at first blush. I think it's clear that Ryan Phillippe, much like his earlier counterpart Edward Norton, is hiding something from his lawyer.

Matthew McConaughey slips into his role as a slimy lawyer much like he slips into a well-worn shirt. Oh wait, that's right, Matthew McConaughey doesn't wear shirts. Thankfully, the supporting cast looks to be top-notch with William H. Macy, Marisa Tomei and John Leguizamo anchoring the film.

I don't know if the trailer does much to make me want to go see it in theaters. Heck, even my colleague Tim was left wanting... anything after seeing it. What do you think?

You had to know that at least one of this week's trailers would make my must-see list and that honor belongs to Source Code. Apple has the exclusive look at the intriguing movie, but thanks to Summit's YouTube account, you can watch it below.

I would that it's an interesting blend between Tron and 12 Monkeys or a dramtic version if you will of Groundhog Day. Either way, I buy it hook, line and sinker.

I think the on-screen pairing of Jake Gyllenhaal and Michelle Monaghan works insanely well and their chemistry is already palpable after just a few short minutes in the trailer. While, I understand that this movie might be tough sell, I think Inception proves that well-written Sci-Fi can be successful and from my impression, this one fits the bill.

Source Code hits theaters on April 15, 2011. What do you think of the trailer and its potential for success?