In defense of the new 'Smurfs' trailer and movie 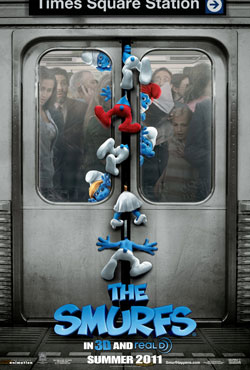 The full trailer for this summer's The Smurfs movie was released this morning and the internet was immediately inundated with vile comments about it. Chants of "they've ruined my childhood" echoed through the Twitterverse.

I'm here to say these people are wrong.

First off, get a grip. The hyperbole being spewed forth is palpable. Here's what author John Scalzi said in a tweet:

The existence of a Smurfs movie assures me that Satan is real and acts malignantly in this world.

That's a little drastic, don't you think? The world, or your tiny little corner of it, is not going to implode because of a silly movie. Keep in mind that this is mindless entertainment aimed primarily at families with little kids.

Hollywood is once again repurposing old '80s TV shows and toys. They hope parents will want to reminisce, dragging their little ones to the cineplex to experience something mommy and daddy used to enjoy. It's the same thing they did with Transformers. And G.I. Joe. And Garfield. And Inspector Gadget. And so on.

That's the real crime here: Hollywood's growing reliance on old franchises for new films. Don't blame Sony Pictures or The Smurfs for just following along. They keep making these things because people keep buying tickets to see them. It's as simple as that. I just wish the studios would bankroll more risky film projects with the dough they are raking in from these hits.

Give the trailer a look and see what you think.

Yeah, it's not The Social Network. Heck, it's not even Toy Story 3. In a market where Alvin and the Chipmunks made over $200 million at the box office, I can't blame them one bit for making this movie. The Smurfs, a much bigger '80s cultural phenomenon, should be able to meet that mark.

Well, what do you think? Is it foolish of me to look at a film solely on its commercial merits? Let me know.