Eddie Murphy to host Oscars? UPDATED: Yes, he will 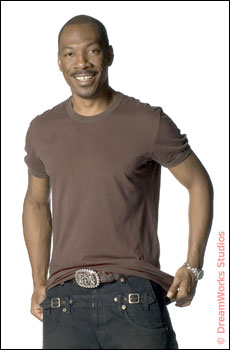 It's only the first week of September, not exactly the height of awards season, but here we are with our second Oscars story in as many weeks. Some of you may remember that we reported back in August that Brett Ratner has been tapped to produce the Oscars telecast, well now he's making sure that he puts his stamp on the 84th Academy Awards.

Nikki Finke over at Deadline Hollywood broke the story on Saturday that Ratner is championing his friend Eddie Murphy to host February's Oscars telecast. While the move to tap Murphy as host is certainly a bold one, it's definitely not an altruistic one.

Eddie Murphy is set to rejoin relevancy in Hollywood with November's movie Tower Heist in which he plays an ex-con that is more along the raunchy lines of his early successful roles in movies such as Beverly Hills Cop. Shockingly, or perhaps not, Tower Heist is directed by Brett Ratner and now you can understand one aspect for Ratner's choice.

Nikki confirms that this is not a done deal and that there is supposed to be a meeting today between Ratner and fellow producer Don Mischer and the Academy to discuss potential hosts. One name that has been rumored to be interested in coming back as host is the consummate professional Billy Crystal.

Perhaps, we'll get another co-hosting duo? I think that could certainly be entertaining as long as Murphy retains his edginess while Crystal plays the straight man. I've long been of the mindset that Eddie Murphy has gone "family friendly" for far too long and that he really needs to get back in touch with his raunchy past to make a comeback.

What do you think of Murphy as an Oscars host? Hey, at least Ratner hasn't explored Jackie Chan's availability.

According to Nikki Finke who first broke the story over the weekend, Eddie Murphy has accepted the hosting gig for the 84th Academy Awards and that an official announcement is forthcoming.

Now granted, Murphy won't be able to channel his Raw style of stand-up comedy, but if we're treated to a non-stop turnstile of Klumps characters, he'll do the impossible: make everyone yearn for a return of James Franco and Anne Hathaway.

And now, the Academy has made it official. The press release is below.

Beverly Hills, CA â OscarÂ® nominee Eddie Murphy, whose performing career spans movies, television and the stage, will host this year's Academy Awards show on Sunday, February 26, 2012, telecast producers Brett Ratner and Don Mischer announced today. This will be Murphy's first hosting stint on the OscarsÂ®. "Eddie is a comedic genius, one of the greatest and most influential live performers ever," said Ratner. "With his love of movies, history of crafting unforgettable characters and his iconic performances â especially on stage â I know he will bring excitement, spontaneity and tremendous heart to the show Don and I want to produce in February." Commented Mischer, "Eddie is a truly ground-breaking performer, whose amazingly diverse array of roles has won him a devoted audience of all ages. His quick wit and charisma will serve him very well as Oscar host." "I am enormously honored to join the great list of past Academy Award hosts from Hope and Carson to Crystal, Martin and Goldberg, among others," said Murphy. "I'm looking forward to working with Brett and Don on creating a show that is enjoyable for both the fans at home and for the audience at the Kodak Theatre as we all come together to celebrate and recognize the great film contributions and collaborations from the past year." Murphy began his career at the age of 15 as a stand-up comedian. In 1980, at the age of 19, he joined the cast of "Saturday Night Live," becoming the show's youngest cast member to that point, and bringing to life many of the show's most memorable characters. His 1983 album "Eddie Murphy: Comedian" won a Grammy Award for Best Comedy Recording. It included portions of his groundbreaking HBO special "Eddie Murphy Delirious." In 1987, "Eddie Murphy Raw" was theatrically released and went on to gross over $50 million. Murphy made his feature film debut in 1982 with the classic "48 Hrs." and would go on to star in such box-office hits as "Beverly Hills Cop" and the "The Nutty Professor" and "Shrek" franchises. All told, movies in which he has performed have earned in excess of $7 billion worldwide during their theatrical releases. Murphy earned an Oscar nomination in 2006 for his supporting role in "Dreamgirls." Academy Awards for outstanding film achievements of 2011 will be presented on Sunday, February 26, 2012, at the Kodak Theatre at Hollywood & Highland Center, and televised live on the ABC Television Network. The Oscar presentation also will be televised live in more than 200 countries worldwide.