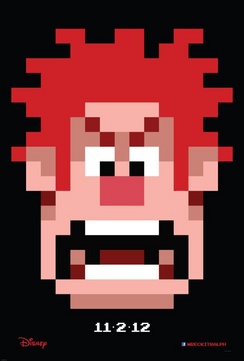 Now that Paramount has ruined my summer by moving G.I. Joe: Retaliation to next year, the movie I'm most anticipating has to be Disney's Wreck-It Ralph.

This animated film stars John C. Reilly as the voice of Wreck-It Ralph. He's a video game bad guy who decides after 30 years to stop being bad. The computer animated movie seems very Pixar-esque but it's a 100% Disney production.

The film arrives on Nov. 2 but the first trailer just dropped over at MSN. Watch it below and see what you think.

I love pretty much everything about this upcoming release. Reilly is the ideal choice to portray Ralph, a large, misunderstood guy in the vein of Shrek. The rest of the cast (Jack McBrayer, Jane Lynch, and Sarah Silverman) all play characters that seem to be in tune with their personas.

The film's production values look tremendous. Ralph appears first in low resolution video game form as part of his old game. The game itself is reminiscent of Donkey Kong and Rampage. As you saw in the video, his off-work world is photo realistic. It'll be nice to see how they segue between the two.

Plus, it's got an enormous attention to detail. Re-watch the scene in the trailer with the bad guy support group. Look for all the classic video game villains. It's easy to spot a ghost from Pac-Man, Bowser from the Mario games, Dr. Robotnik from the Sonic the Hedgehog series, and many more. The characters from Qbert seem to have a significant role as well. Simply licensing all those properties had to be no small feat for Disney.

Wreck-It Ralph has the perfect opportunity to be wildly successful. It's got 30 years worth of video game nostalgia for parents and a very cute and funny story for the kids.

What do you think? Is this something you'll see? Let us know.