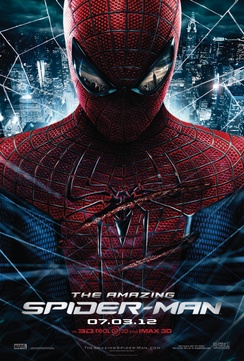 For those of you that were clamoring to your computer screens last Monday hoping for a new Monday Morning Mixer (MMM), I apologize. If I were a courteous blogger, I would have given you fair warning two weeks ago that I would be on vacation and therefore, most likely, not submitting a MMM.

But alas, I'm neither courteous nor an overachiever and so, here we are.

I will try to provide better communication in the future when the MMM is not going to happen. But, I wouldn't count on it.

But enough about my shortcomings, let's get this Mixer going, shall we?

Would it be too on the nose if I said that this weekend's box office was Amazing? Well, it was.

Sure, the latest Spider-Man movie had a lot to do with this weekend's impressive box office haul, but the real story behind the 28% increase over last year's numbers may be the weather. When the temps soar, people look for relief wherever they can get it.

Even if that means paying a ridiculous amount of money to see flickering images on a big screen. Movie theaters have long benefited from the cooling forces of air conditioning and this Summer is no exception. Unless you lived in Washington state, you were apart of the 3,282 daily heat records either set or tied in the month of June.

What this means is that an already busy and crowded marketplace was inundated with even more people looking to either cool off or see a good movie or both. The Amazing Spider-Man has grossed $140 million in its first week of release. If it had done so all this weekend, that would have been quite impressive, but the film actually opened up last Tuesday ahead of the July 4 holiday.

Still, its $65 million opening was impressive, even if it failed to surpass any of the three previous Spider-Man films*. But I'm going to put an asterisk next to that statement given that had it opened on a traditional weekend, I'm sure it wouldn't have had much trouble finishing second or third on that list.

The real story is further down the list where Ted and Brave continued to hold over well. At this point Ted should have no problem overtaking 21 Jump Street for the top grossing R rated comedy released this year. Brave, on the other hand, surpassed A Bug's Life and got out of the proverbial Pixar cellar. When all of the receipts are tallied from this Summer, I think Brave will finish somewhere in the middle of Pixar's box office releases around WALL-E's $224 million.

After last year's train wreck that was Cars 2, I think it will be safe to say that Pixar is back. Did it really go anywhere?

Among the other notable new releases this past weekend, Oliver Stone's Savages took in $16 million which I'm sure was a bit of a downer for Universal, but it was Stone's third biggest opening ever behind Wall Street: Money Never Sleeps and World Trade Center.

As for Universal, I think it's safe to say that they won't be in the Taylor Kitsch business much longer. After the abysmal flops of John Carter (Disney) and Battleship (Universal), Kitsch's Savages completes the Summer trifecta of box office banality with his third stinker of the season. Are there any football movies in the pipeline?

Finally, I wouldn't be doing you any justice (or able to live myself for leaving this joke on the table) if I didn't at least check in with Magic Mike. It seems that Mike was in need of a fluffer for its encore performance after it loss more than 60% of its opening weekend stiffness.

Shockingly, most of the reviews that I've seen from the throngs of women who flocked to see it opening weekend was that the stripping parts were good, but the story fell flat. I mean come on, it's a movie about strippers, you knew what you were getting into. If Magic Mike doesn't get some Viagra stat, I think it's safe to say that his performance will be a one trick pony.

A Tale of Two 'Dark Knights'?

It was the best of times, it was the worst of times. And if you have no clue what I'm talking about, it might be time to see good old Cliff for his notes.

Give the absolute turmoil of events in the novel and the dark, dark, dark overtones, I think it's safe to say that The Dark Knight Rises will be anything but a shiny, happy bow on an otherwise bleak series of movies. This gives me hope that my critique exposing why The Dark Knight Rises must fail might be proven wrong by Nolan. But more on that later this week.

I know that header is a bit misleading, but don't be surprised if we do see more than Christian Bale's Batman in The Dark Knight Rises. SPOILER ALERT There have been whispers that Joseph Gordon-Levitt picks up Batman's mantle at some point in the film under the guise of Azrael.

I added the spoiler alert above, but in all honesty this is just pure speculation and conjecture on the Internet stemming from a leaked toy line amongst other tidbits.

If this wasn't enough The Dark Knight Rises news, the powers that be released a 13 minute featurette that includes new footage and interviews with all of the principal players in the film. Remember The Dark Knight Rises is almost three hours long, so no matter how much footage that leaks out, I doubt we will ever be able to say that we say the whole thing ahead of its release.

Negative One Degree of Kevin Bacon

Ok, who hasn't played the game Six Degrees of Kevin Bacon? That's what I thought, well, the game took a new turn this weekend when the PBS show "Finding Your Roots" actually revealed that husband and wife Kevin Bacon and Kyra Sedgwick are distant cousins.

Before you say 'ew,' the TV series did make a point of saying that the relation between the kissing cousins was distant, so there's no need to get grossed out. In fact, they say that it highlights just how close we are as a species, despite our differences.

So, would that make Kyra a -1 degree from Kevin Bacon? Either way, she definitely wins the game!

While I really enjoy doing these MMMs, the one thing that I don't like about them is having to report on the sad things that happen over the weekend. This weekend had another sad note as respected thespian Ernest Borgnine passed away.

Featured in over 200 movies and TV series in his seven decades of work, the Academy Award winner was typecast as a bad guy early on due to his physique and lack of traditional leading man looks, but he was an endearing actor who might go down as the greatest character actor ever to have lived.

He won the Best Actor Oscar for his role in 1955's Marty, but later in life he was able to stretch his comic chops and this is the Borgnine that I will always recall. The 95-year-old actor had a great sense of humor and I think he would be pleased if he knew that his part in BASEketball would be the one providing his eulogy today.

And really is there any way to follow that up? I didn't think so. I'll end it there, but as always we welcome your thoughts and comments.

Until next week, mix well my friends.