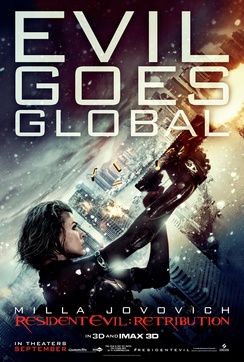 In this week's edition of the Monday Morning Mixer, the irony will be dripping off liberally. We mentioned last week that the box office was beyond stagnant and it didn't really get much better this week.

September is quickly becoming the new January when it comes to dumping movies at the megaplexes and simply hoping for the best. Of course, the best at this time of the year isn't usually worthy to write home about.

No, this month is quickly becoming a transition month as Hollywood gears up for the lucrative fourth quarter. It seems that awards season is starting up earlier and earlier each year and I won't be too surprised when September begins featuring early Oscar hopefuls.

To wit, this weekend saw a bunch of trailers debut and they are slowly making their way online. We'll feature some below and a couple will get their own proper story on the site.

I don't know what the weather is where you are, but it's gloomy and rainy here in Nashville. It's perfect weather to snuggle up with a cup of coffee and take in the MMM

Milla Jovovich has quietly built quite an empire on her many turns as Alice in the Resident Evil films. In the last decade, she has played the face of the resistance against the Umbrella Corporation five times and each chapter promises to be the last.

And yet, like the little pink Energizer bunny, the franchise just keeps going and going. I gave up after 2010's Resident Evil: Afterlife was painfully just an obvious money grab at the lucrative 3D dollar. While the trailers for Resident Evil: Retribution looked promising, I resisted the temptation.

Sadly, it seems that I was the only one.

Resident Evil: Retribution took the top spot at the box office this past weekend with $21.1 million. While Retribution's opening was only good enough for fourth place (out of five Resident Evil films), the franchise has settled in to the $20-25 million opening, $50-60 million total gross range.

While those numbers are far from gaudy, it's the International numbers that will insure that Resident Evil will continue to produce films every two years until Milla finds herself incapacitated by old age. And even then, I'm sure they could write around it somehow.

In second place, it was the 3D re-release Finding Nemo that swam to calmer waters with a cool $17.5 million. While it didn't quite reach the upper echelons of The Lion King and its $30 million 3D re-release opening, it should generate enough business to continue the flood of 3D re-releases at the megaplexes.

Everyone knows how I feel about this practice, so I won't belabor the point too much other than to say if original films continue to flounder, it will only validate the studios' practice of re-purposing older films which isn't as costly as creating a new film. So, I guess we all share some blame in this if we don't support original films at the box office.

While the total of all films was the second worst of the year (just behind last week's abysmal performance), there is some cause for celebration. The highly anticipated awards season contender The Master opened on 5 screens and earned $730,000. This performance was good enough for the second best live action per screen opening ever behind only Kevin Smith's Red State.

Do you remember that seminal movie for geriatrics called Space Cowboys? I hope for your sake that you don't. At the time, it was hailed as Grumpy Old Men meets The Right Stuff and while my parents loved it, it just didn't resonate with me.

Now, it seems that it's time to dust off the old Grumpy Old Men analogy. While you might think that The Crew would be an apt attempt at marrying Grumpy Old Men and Goodfellas, it just never seemed to hit the gravitas of the latter film enough to be taken serious.

If The Crew strayed too far into the comedic sphere of things, then the reverse might be true for Enter Stand Up Guys. If you ever wanted to know what would happen if The Godfather and his cronies grew old, this film is quite literally for you.

Al Pacino retraces his steps by playing Val a wise guy who just got of prison after serving a 28 year sentence for refusing to give up one of his associates. Upon his release, he meets up with some of his old crew including Christopher Walken and Alan Arkin.

Despite their advanced age, these wise guys still prove that they have what it takes to be a Goodfella, including the ability (if not the desire) to silence someone once and for all.

It's certainly not the worst trailer that I've ever seen, but it definitely raises more questions than it answers. First and foremost, if Val went to prison for so long and didn't talk, why is he such a risk that he has to be killed, by his best friend at that? Also, if he was such a huge threat, why didn't they whack him in the joint?

If there's a reason to be excited, other than seeing those three act opposite each other as old mobsters, it's that Fisher Stevens is directing. True, his only other feature film directing credit is 2002's Just a Kiss, but I think he's come a long way in the last decade and I'm pretty sure that Rotomation won't be used at all.

At least, I hope not.

I think this just goes to show why its important for all the the good mobsters to die young. Not only to leave a pretty corpse as they say, but also to spare us from having to suffer through a glorified commercial for Geritol and Viagra.

James Bond has always been an enigma of an action hero. He's both action and style. Half work, half play. I guess that's one reason why he remains to be so popular despite cycling through a half dozen 007s.

While it took a moment or two for people to accept the "blond Bond," I think that it's safe to say that everyone is on board with Daniel Craig as the most dangerous weapon On Her Majesty's Secret Service. Although, I think that sometimes those of us on this side of the pond forget that James Bond is unabashedly British.

Maybe it would help if he stopped more often and enjoyed the traditional tea time. Although, after his cameo during the opening ceremonies of the London Olympics this past Summer, we were reminded just how British he is.

But Sony isn't so sure.

They debuted new theatrical one sheets this weekend for Skyfall, the latest Bond adventure due out stateside on November 9. As you can clearly see, they went with striking differences for the two posters. 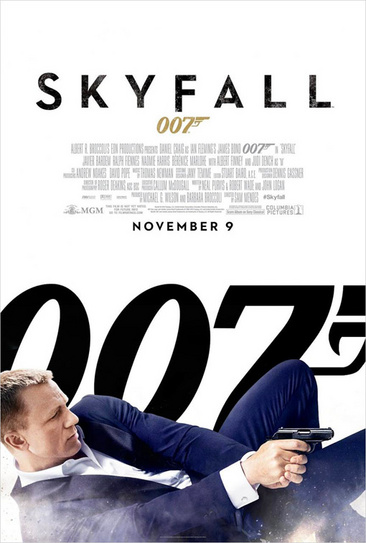 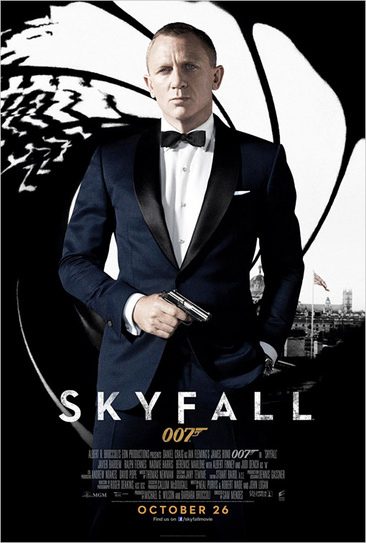 The one-sheet for the American audience features Bond in an action shot with dust flying and his gun sighted and ready to fire, while the British version is much more reserved. In the international one-sheet, Craig is wearing Bond's trademark tuxedo and looks refined, while in the US version, his tie is gone and he's sliding prone to the ground.

It's not the first time that a studio has chosen to market a movie differently based on the audience. In fact, it's something that happens all the time in the industry, but it's always interesting to see the subtle differences on such a beloved character.

Finally today, the second trailer for Wreck-It Ralph hit the Web this weekend. As you may recall, I was pretty high on the first trailer, so this one was set up with high expectations.

I'm happy to report that despite my high expectations, I enjoyed this new look at the film even more. The latest trailer delves more into the film while the first one set up the general concept of the film.

There's a lot of Sarah Silverman in the clip and that's always a good thing. While I can't imagine there will be much in the way of ground breaking in the film itself, it's great to see the same old story told in such a novel way.

Wreck-It Ralph hits theaters on November 2. As for today's MMM, I always find it best to end on high note and I can't think of a better note than that.

Until next week, mix well!