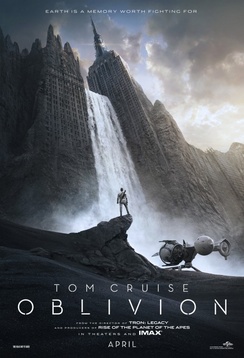 They say that you can't hit a home run each time out and if last week's performance by 42 was considered a homer, then I would call this week's Oblivion a solid double. Although, for Tom Cruise, who is badly in need of a victory, I'm sure he'll chalk it up as a win.

Just when the box office gets a bit boring, things ratchet up off-screen as Hollywood just can't stay out of the limelight. There's a great "When Stars Play the 'Do You Know Who I Am?' Card" from one of the most unlikely of sources and a bit of Robert Downey, Jr. being Robert Downey, Jr. while out and about doing the publicity tour for Iron Man 3.

I haven't been this jazzed about a Monday Morning Mixer in a long time, so sit back, grab two cups of Joe and prepare to be entertained. It's MMM time.

In case you blinked and missed it, the last time Tom Cruise brought a movie to megaplexes, Jack Reacher bombed with only a $15 million opening. Before that, it was the abomination known simply as Rock of Ages, which settled for a measly $14 million opening.

So, when news broke over the weekend that Oblivion was trending to open north of $30 million, that collective exhale you heard came from the studio execs who were beginning to question Tom's star power. While Tom is far from his heyday, Oblivion's $38.2 million was a shot in the arm for both the actor and the industry as a whole.

April is always a tricky month as studios usually keep their biggest releases for the more traditional May through August Summer period, but in the last few years, Summer has been bleeding more and more into April, and even March with last year's The Hunger Games. I think it's more an indication that audiences will seek out great movies no matter when they are released than simply a product of a decades old mindset that only the Summer months are fit for the biggest, the brightest and the most derivative. Sigh.

There's really nothing new to see with Oblivion. It looks like simply the latest in a long line of Matrix-wannabes with a little WALL-E thrown in for good measure. It doesn't take much to figure out the twist, but I won't spoil it for those who want to go in with a clean slate and a naive mind. Suffice to say, if Morgan Freeman weren't in it, there would be absolutely no hook to draw me into it.

Oblivion looks to be set to hold onto the audiences for another week or so and should end up with a total over $100 million and closer to $125 million.

There really wasn't any other new film in wide release this week, so there isn't much else to talk about. 42 continued to perform well, only falling off its opening by 33% and looks strong as May approaches. 42 is still on track to bring in close to $100 million, but I think with this past weekend's performance, it should break through the $100 barrier with little difficulty.

The Place Beyond the Pines continued its slow ramp up and moved up from 10th to 6th place with $4.7 million for the weekend. This has all the makings of one of those long-legged films that will never snag the top spot, but will end up with over $50 million. Currently, it's total is $11.4 million, but there's still plenty of meat on this bone.

She didn't 'Walk the Line'

Here's a story that you don't hear every day, although I'm sure TMZ would disagree. According to numerous sources, including the aforementioned TMZ, actress Reese Witherspoon was arrested in Atlanta over the weekend for disorderly conduct.

The events started to get Hollyweird when the actress and her husband, CAA agent Jim Toth were pulled over for failing to maintain the lane on a suspected DUI. Jim was driving and the officer started to conduct the field sobriety test, but Reese wasn't going to take matters sitting down.

After harassing the officer while hanging out of the window, Reese got out of the car in an effort to speed up the process. The officer told her to return to her car, to which Reese replied that she was a 'US Citizen' and that she was allowed to 'stand on American ground,' according to the arrest report.

After sobering up a bit and a few days to think back upon her actions, the actress released the following statement.

Out of respect for the ongoing legal situation, I cannot comment on everything that is being reported right now. But I do want to say I clearly had one drink too many and I am deeply embarrassed about the things I said. It was definitely a scary situation and I was frightened for my husband, but that was no excuse. I was disrespectful to the officer who was just doing his job. The words I used that night definitely do not reflect who I am. I have nothing but respect for the police and I am very sorry for my behavior.

If you want to see the mug shots, I would recommend checking out TMZ as they always seem to get them faster than anyone else.

If there's anyone who can relate to Reese's recent legal troubles, it's Robert Downey, Jr.. The actor was in France recently to help promote his upcoming blockbuster Iron Man 3 and in typical RDJ fashion he was able to woo the journalists with a few perfectly placed words.

Co-star Gwyneth Paltrow was being respectful of the native tongue and used her impeccable French skills to answer questions asked of her in the country's official language. In contrast, RDJ's French skills weren't quite up to task and he took full advantage of the interpreter. Finally, RDJ had enough and he spoke out about Gwyneth's skills and her life of privilege in a way that only Robert Downey, Jr. can.

Nope, they sure don't "teach French in jail." What a great quip from RDJ, proving yet again that the charismatic actor was the absolute perfect choice to play Iron Man, a choice that has made the actor and various studios involved in the Iron Man franchise a ton of money over the years.

If you'd like to see more of RDJ in action around the world, check out this compilation video put together by Marvel. I think you'll agree that RDJ is Tony Stark and vice versa.

The Hand that Rocks the Mother

Tim coined the phrase above after watching this trailer and I thought it was so spot-on that I stole it. Emanuel and the Truth About Fishes looks to be a perfect blend of The Hand that Rocks the Cradle and Single White Female.

While you may be scratching your head as to how these movies could be combined, don't worry, the trailer will answer that. It also stars Kaya Scodelario who is on our short list for the next look at surefire A-listers in the making.

Emanuel and the Truth About Fishes debuted at Sundance earlier this year and we are waiting official word for its theatrical release.

I think I'll quite while I'm ahead. And look at the time, another MMM delivered on time. At this rate, I might even get Project 52 back on track. Doubtful, but you never know.

Until next week, mix well.