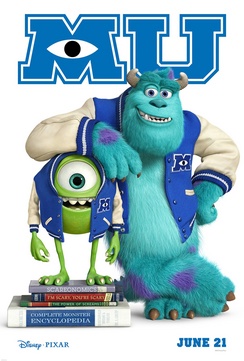 If you ever wondered what all of those 1980 college comedies such as Revenge of the Nerds and Animal House would look like as an animated, family-friendly film, then Monsters University is right up your alley. It's also a Pixar film, so that means that it's probably better than those films.

Monsters University is the prequel to Monsters, Inc. and it reunites Billy Crystal and John Goodman as Mike and Sully respectively. In the first film, the pair are inseparable as a team of Scare Monsters and Monsters University looks to delve into where they first met and became friends, college.

So far, everything associated with the film looks to be solid gold and this trailer is no different. We get a bit more in terms of plot in this trailer, but really, does it matter? Mike and Sully are back and that's more than good enough for me.