Kristen Wiig loses it in 'Girl Most Likely' trailer 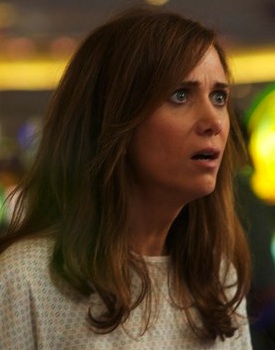 When you have a breakout hit, I can only imagine that there will be immense pressure on the follow-up. The trailer for Kristen Wiig's follow-up to Bridesmaids might be a look into her future, but from the looks of it I think she's safe from the old sophomore slump.

In Girl Most Likely, Kristen's character is a playwright that goes from the "next big thing" to "last year's news" in quick succession and suffers a psychotic break as a result. Enter her quirky family for some emotional support.

Originally titled Imogene after Kristen's character, the film has gotten a new title and trailer that prove that the young comic star is the real deal and that Bridesmaids wasn't a fluke. Surrounding Kristen is an interesting cast of characters ranging from the seasoned in Annette Bening and Matt Dillon to the fresh-faced in Darren Criss and Christopher Fitzgerald.

To be fair, Darren Criss has starred in Glee the last few years, but since I like to live in a world where I pretend that Glee doesn't exist, I'm going to say that he's new to acting altogether.

The film recently settled into a July 19 theatrical release and this is the first that we've seen from the film. So far, we're hooked.