'The World's End' trailer promises a night you won't remember 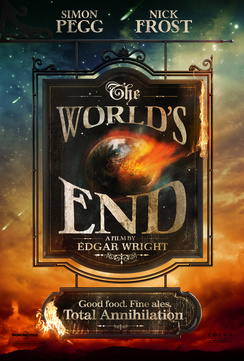 I loved Shaun of the Dead. I enjoyed Hot Fuzz. The jury's still out on The World's End.

The third and final film in the so-called Three Flavours Cornetto trilogy, The World's End follows five friends who reconnect 20 years after a failed pub crawl intent on finishing what they once started.

The premise sounds smashing to borrow an English term, but the execution might be troubling if the first trailer is any indication. The twist to their second attempt at the pub crawl is that when they return to their hometown, something is a bit off.

The bit off part concerns aliens or Stepford Wives type beings who have infiltrated the town. Amid the pint guzzling through the evening, these five friends find themselves in the unlikely position of saving the world.

Unfortunately, the first glimpse of the film immediately made me think of The Watch and that's not a good thing. I have faith though in Edgar Wright, Simon Pegg and Nick Frost, so I'm holding out hope that this film won't be a disappointment.

Of course, it could simply just be a matter of raised expectations after the first two films. The World's End hits theaters on August 23 on this side of the pond.