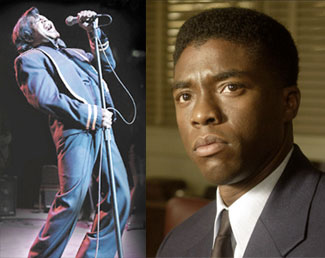 Chadwick's got a brand new bag

I love music biopics. Seeing the development and rise of musical superstar often makes for a monumental film. Think of Walk the Line, Ray, or The Doors. Those are movies from three diverse music genres that became favorites among fans and critics.

Another music docudrama is poised to join that group. Universal has greenlit a film based on the life of James Brown.

Star of the Jackie Robinson biopic 42, Chadwick Boseman has been cast as the Godfather of Soul. Legendary producer Brian Grazer is helping to make it a reality along with another music superstar you may have heard of. Mick Jagger is a producer as well along with Erica Huggins and Victoria Pearman.

Heaping on more talent, The Help director Tate Taylor will helm the project. Variety has the full story that also includes a note that the movie will be shot in Mississippi. Brown grew up in neighboring Georgia amid terrible poverty.

It's pretty obvious that this film has a lot of promise. James Brown is a legendary figure and commanded a lot of attention during his life. Given the associated cast and crew, this project is probably among my most eagerly anticipated.

This biopic also got me thinking of other music biographies that could be interesting to see. A personal fav of mine, I think the life of Eric Clapton would make a great movie. Precisely the period where he falls for Pattie Boyd, the wife of his good friend George Harrison. Clapton famously wrote the song "Layla" about her.

What are your expectations for this yet untitled James Brown film? Also, what other icons from the worlds of rock, country, R&B, and hip-hop would you like to see as a movie?

The Brown biopic is now titled Get On Up, borrowing a lyric from his 1970 hit "Get Up (I Feel Like Being a) Sex Machine." The film is being released on Oct. 17, 2014, a good positioning for possible awards consideration.