Rogen vs. Efron in raunchy red-band trailer for 'Neighbors' 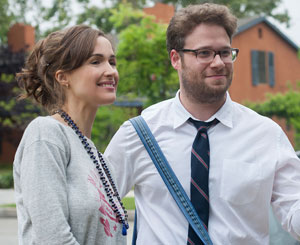 Our homes are our escape from the rest of the world. When someone interfers with that domestic tranquility there's heck to pay. In the setting of a red-band movie trailer, that easily translates into "hell to pay."

In the upcoming film Neighbors, Seth Rogen and Rose Byrne are young parents who get new neighbors in the form of a college fraternity. The frat is headed up by Zac Efron and Dave Franco. On one side of the property line it's Sesame Street and diapers. On the other side it's beer and debauchery. A feud is inevitable.

Check out the red-band (definitely not approved for all audiences) trailer below. It comes courtesy of MTV.com.

This movie certainly looks like a lot of fun. I'm really look forward to the one-up-manship between Rogen and Efron. It could easily find an audience left in the wake of The Hangover trilogy.

Speaking of those guys, the casting here looks superb. In addition to these four, the film also has Christopher Mintz-Plasse, Lisa Kudrow, and Jake Johnson. Johnson (from Safety Not Guaranteed, Drinking Buddies, and TV's New Girl) is quickly becoming one of my favorite comedic actors.

Neighbors (formerly titled 'Townies') is directed by Nicholas Stoller, the man behind Get Him to the Greek and Forgetting Sarah Marshall. It hits theaters on May 9, 2014.