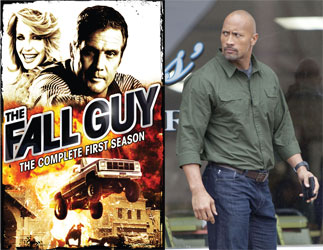 I never would have guessed the Lee Majors series The Fall Guy to be next in line but it appears it is. The Hollywood Reporter reports from the Toronto International Film Festival that Dwayne Johnson, a.k.a. The Rock, is set to star in the remake for director McG. Johnson's old employer WWE is putting together the action film along with Hyde Park Entertainment.

Fall Guy ran on ABC for five seasons, ending in 1986. It featured a film stunt man (Majors) who took on bounty hunter jobs when his main job became slow. The show's cast also included '80s mainstays Heather Thomas and Markie Post. Season 1 of the show is available on DVD but Season 2 (or subsequent years) never materialized.

Neither Johnson nor director McG are strangers to remakes. Johnson has appeared in numerous: Walking Tall, Get Smart, and Race to Witch Mountain among them. McG did both Charlie's Angels films.

According to THR, this isn't the first attempt to make film from The Fall Guy. Apparently Nicolas Cage was set to star at one point. (We dodged a bullet there.)

What do you think? Is The Fall Guy a prominent enough '80s property to be a successful film? Are there any other old TV shows you'd rather see made into a film?