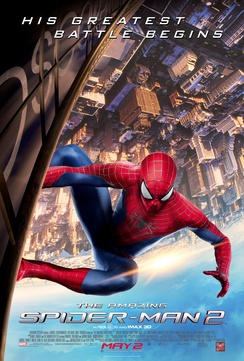 May the Fourth be with you.

Who doesn't love this month? May might possibly be my favorite warm-weather month of the year. One thing is for certain, there's plenty of distractions this month for everyone, so no matter what floats your boat, you'll surely find something to celebrate and enjoy.

For most of us, that includes big Summer blockbuster movies and this year is no exception. The Amazing Spider-Man 2 was the official kick-off film of the Summer and thankfully, this Summer won't be solely judged on its performance.

Of course, what's in a number? The age-old argument continues in this week's MMM.

First, the good news. The Amazing Spider-Man 2 opened to a strong number. I'm not sure that you can call a $92 million opening weekend a failure, but they will try. It seems that for a certain few, there is not floor high enough when it comes to Summer films, especially Summer comic book movies, but the Spider-Man movies have a business model all their own.

Trying to compare the Sam Raimi films to the Marc Webb series is really like trying to compare apples to oranges. The first series lived in a pre-Avengers world, while the new franchise lives in its shadow. Given that both properties find their roots in Marvel comics, you would think that they would both find similar success, but that's been furthest from the truth.

You see, that's because Sony owns the rights to Spider-Man (much like Fox and X-Men) and as long as they keep churning out films then they will retain the rights to the character (over-simplification). That's why we will never see Spidey suit up for The Avengers and why we will continue to get increasingly stale and shoddy Spider-Man films every two to three years or so.

A $90 million opening is pretty good and it is on par with Captain America: The Winter Soldier's $95 million opening a month ago, but it furthers a trend that Box Office Mojo labels "franchise fatigue." Again, it's hard to compare The Amazing Spider-Man 2 to the first film in this new series because that one opened up over and extended fourth of July holiday weekend, but the second film is trending to end up with $225 million at the box office which would be about $40 million less than its predecessor.

Unfortunately, there's no end in sight as The Amazing Spider-Man 3 os set for a 2016 release and The Amazing Spider-Man 4 will bow in 2018. There's also a Sinister Six film in there somewhere. Granted these films are still doing big business, but when will the fatigue and sub-par quality finally catch up with these films? And more importantly, what effect will that have on the other Marvel films?

Well, that's a discussion for another day. For now, we sit back and wonder what might be while "celebrating" a "weak" $90 million opening.

Until next week, Mix Well.