Review: 'The Scribbler' is a mind-melting good time 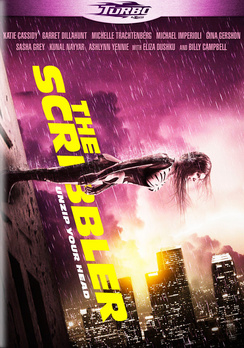 Every so often a film comes down the pipe that truly gets my attention. It's becoming ever more difficult these days as Hollywood continues to shove retread after retread after sequel down our throats. If it's not an adaptation, a sequel or a comic book property, then Hollywood isn't interested.

That's why I feel that it's more important than ever to find a trusted source of movie knowledge. In the old days (look at me, using such a quaint term to describe the 1980s-90s), that trusted source usually took the form of your local video store clerk. With the onset of big box discounted copies, Netflix, Redbox, Hulu, you name it, the lost art of suggesting a film for a consumer is becoming even more elusive than ever.

Which is ironic given that we live in the Internet age where it's easier than ever to get a review/recommendation on a film, but how do we know that we can trust said review. Therein lies the rub. Perhaps the greatest loss in the decline of neighborhood video stores is that unique social interaction where your video clerk actually knew you and based on your likes and tastes (and past viewing behavior), he or she could make a pretty uncanny spot-on pick for you to try out.

If you still have that local video store, please embrace them and cherish them for what they do. If you find yourself in my situation where the nearest local video store is in a different time zone, then let me be your guide. No pressure or anything, we've never met, but I will do my best to guide you in the right direction.

One film that you might like came out today and it's called The Scribbler. I watched it recently and while yes, technically it is based on a graphic novel, the chances of you actually knowing anything about it is pretty slim. As a bonus, the writer of the graphic novel, Dan Schaffer, also wrote the script, so it's already better off than 90% of the other comic book films. 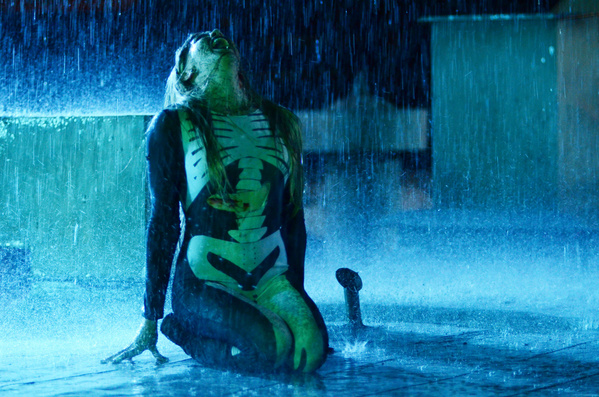 It's really hard to describe what The Scribbler is other than it's a complete shock to the system. If you like stylized films in the vein of Zack Snyder, then The Scribbler will be right up your alley. It's not overly done and let's face it, The Scribbler was made with a tenth of the budget of 300, if that, but there's enough cool stylization to make you realize that you are probably seeing a film based on a graphic novel. And while yes, there will be comparisons made between it and Sucker Punch, beyond the strong female protagonists and stylized visuals, the comparisons fall flat.

Thematically, it's easy to make comparisons to recent theatrical fare like Lucy with its strong female protagonist with an "enlightened" mind, but these comparisons are doing a disservice to both films as Lucy is more action-oriented on a grander scheme, while The Scribbler is more introspective and personal. For me, I felt in many ways like I did the first time I watched Donnie Darko after seeing The Scribbler. If fact, had the main character been named Samantha Darko instead of Suki, I wouldn't have batted an eye if you told me that it was a direct sequel to Donnie Darko. 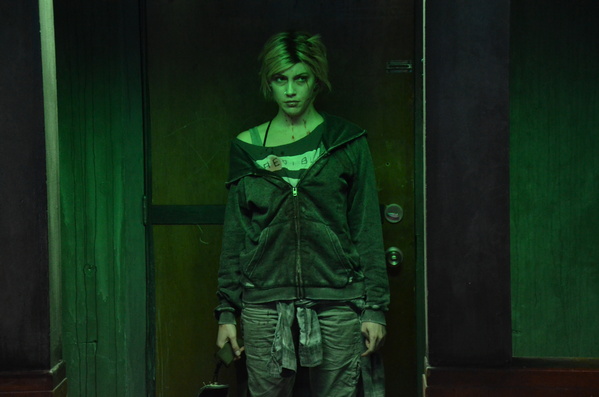 The cast, though, is what initially drew me in to the film. Led by relative newcomer Katie Cassidy, it felt at times that the film was casted way out of its league, and yet, none of the choices seemed to take the viewer out of the film. Such names as Eliza Dushku, Michelle Trachtenberg, Gina Gershon, Michael Imperioli and Garret Dillahunt are usually reserved for bigger budgeted affairs, but it's refreshing to see them working for what must be way below scale to deliver a really fine picture. 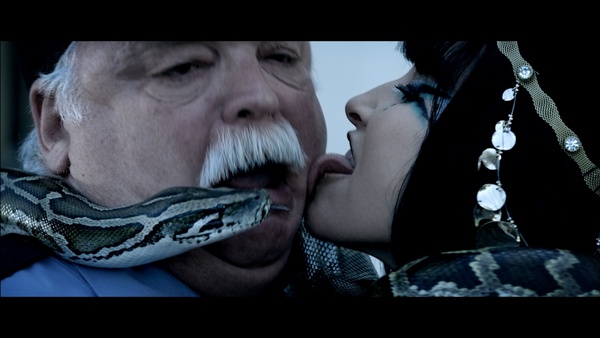 Katie Cassidy may be a new name to you, but if you watch some TV, you've probably seen her on shows such as Arrow or Supernatural. Honestly, my only inkling of her before seeing this was through her Daddy David Cassidy who was one of those 1970s singing heart throbs and his interaction years later with Steve Poltz. You can check all of that out if you wish, it's really germane to The Scribbler, but Poltz is cool.

Anyhow, back on topic, when you're basically in every scene in a film, it's pretty important that you not suck. Thankfully, Katie Cassidy does not suck and it's a role that is made even more challenging by the fact that she has to carry about on in about seven or so distinct personalities.

This is probably a good place to tell you just enough about the film to whet your whistle. Katie plays Suki a woman diagnosed with dissociative identity disorder (she's got multiple personalities, sorry I have to respect my Psychology degree by getting the terminology correct) who is undertaking a new, controversial treatment called "The Siamese Burn." Thankfully, they don't go into a boring description of the treatment, but basically imagine that they "burn" away unwanted personalities through shock therapy. Silly, I know, but not any more so than having the ability to fly except when a little green gem is close by.

So, as the treatment progresses, Suki is transferred into this bizarre halfway house/tower of terrors where other mental patients are trying to ease their way back into society. Her arrival to the complex corresponds with a spate of apparent suicides and soon she, or more accurately one of her remaining personalities is suspected of killing her fellow residents.

As you can see, this role would be challenging for even the most experienced of thespians, but Katie pulls it off with aplomb. Even better, she truly makes us care about her character and her inner struggle with herself despite the ridiculous circumstances around her. Did I fail to mention that there's a talking bulldog at one point? 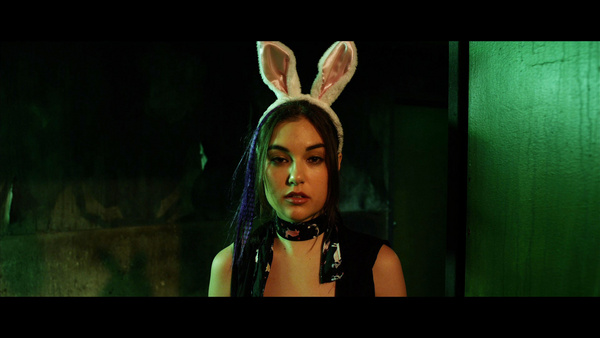 And that brings me to the heart of the matter. It seems that before The Matrix, many films dealt with the physicality of man often shunning the internal workings of the mind. After The Matrix, things changed swiftly. It seems that the mind and its complexity has played an ever-expanding role in Hollywood and this is no different in The Scribbler.

Unlike its predecessors though, the outward actions take a back seat to the inner turmoil of the protagonist. If you peel off enough layers, there are some pretty compelling treatises going on with identity and losing oneself in alternate realities that are applicable to the growing reliance of social media and the anonymity it claims to provide.

What is dissociative identity disorder and how is it any different than simply creating a new identity on a different social media platform? All of the obvious clinical stuff aside, it would appear that the film leaves the answer to that question rather ambiguous. What I love most about the film is though is that it shares many characteristics with some of my favorite films. 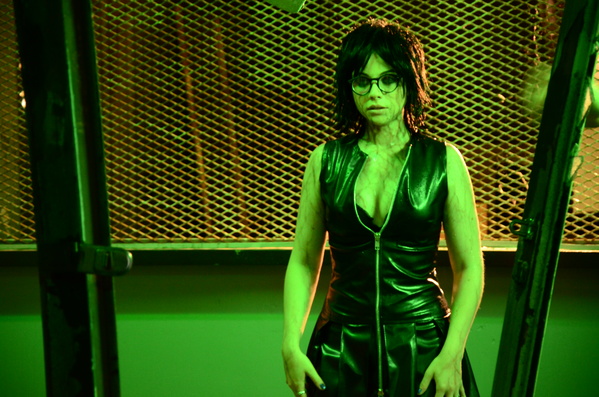 For me, I want a film to present me with something that challenges and entertains me. With The Scribbler, the challenge is two-fold. How are they going to resolve the inner voices and demons plaguing Suki and what is up with all of the untimely deaths at Juniper Tower? Without spoiling the ending, the interesting thing about any good film is whether it elicits anything after the credits roll.

Does the film stick with you or is it just another disposable product in a world that is becoming more and more disposable? The interesting thing is that the film is set up in a way that leaves you questioning everything that you saw. The storytelling is unique and the timing a bit jarring. Not as jarring as say Memento, but you can tell that the latter influenced the former. 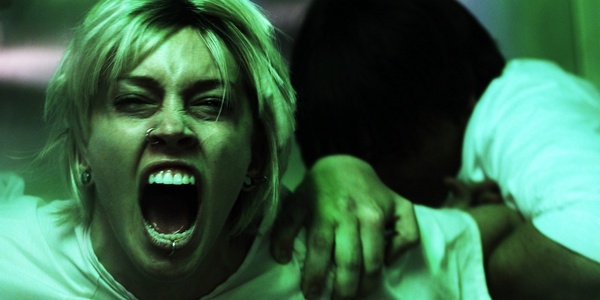 When asked by the detectives to tell the story from the beginning, Suki quips, "it's not always the best way to tell a story." Ultimately, the film dumps a lot of interesting things onto the viewer and they aren't all tied up neatly with a bow and this is precisely the sort of films that I gravitate towards. It's one that you want to talk about with others and see what they saw.

And that's the true brilliance of the film, just as Suki is dealing with multiple personalities, viewers are left with multiple ideas. It's a vexing and rewarding challenge to sift through it all and figure it out.

The film is not without its flaws though and most of The Scribbler's flaws come from the lack of budget and obvious need to flesh out the source material. As I said, the film was casted brilliantly, but at the end, you wonder if perhaps they could have done more with a Gina Gershon or a Eliza Dushku.

But in the end, the film makes you think and you realize that much like One Flew Over The Cuckoo's Nest before it, The Scribbler questions the therapeutic value of institutions and whether you are better or worse off when you leave. After watching The Scribbler, I feel that I was better off than before and I think you will be too.