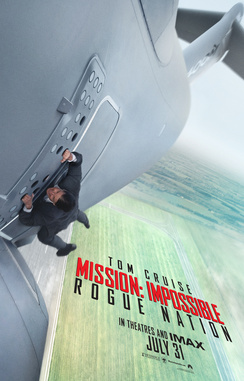 One of the most overlooked films of 2015 is the latest Mission: Impossible film. Yes, Tom Cruise and friends are back for the fifth installment of the popular franchise and it doesn't look like it's losing any steam whatsoever.

The main reason for the lack of awareness is mostly due to the studio as they hadn't released a poster or trailer yet for the film that debuts in theaters on July 31. That all changed today as the marketing strategy went into overdrive. Not only did we get the first poster (right), but we also go the first full-length trailer for the film.

The full title of the film was also announced as Mission: Impossible Rogue Nation, which sounds an awful lot like a certain Star Wars spin-off that was announced a couple weeks back. In fact, there's a pretty interesting story with the title and the ongoing talks with Disney may have delayed the start of their own efforts in marketing this film.

Regardless, the film looks great and that's really all that matters.