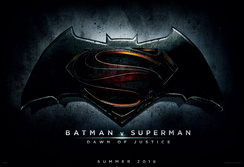 In the whole Marvel vs. DC fight, it's no secret that DC is losing the war when it comes to finding joy in our cinematic hearts. It goes beyond one's devotion to one comic book house over the other, Marvel simply took the concept of creating a cinematic universe and made it a reality.

Despite the highly successful Batman films created by Christopher Nolan, the rest of the DC films have had a hard time finding box office purchase. Well, if you can't beat them, then why not join them?

Next year's Batman v Superman: Dawn of Justice will officially kick off the whole DC equivalent of the MCU by introducing new characters (Wonder Woman) that will have their own films in the next couple of years and will lead to 2017's Justice League of America Part One. If there's one thing to take away from the trailer, it's a lot darker than I was expecting - and that's a good thing.

The MCU takes a more fun, comic book approach and the general consensus seemed to be that director Zack Snyder would move away from Christopher Nolan's bleak, realistic world in favor of the brighter pastures of the MCU. This trailer makes you think that there will still be plenty of darker tones in Batman v Superman.

The reaction to the trailer has been pretty positive, while the detractors seem to be hung up on the absurdity of a battle between Batman and Superman. It seems that Ben Affleck's Batman picks up on it when he asks Superman if he bleeds and then answers his own question by throwing down the gauntlet, "You will."

Of course, we know that the combatants will survive and buddy up for JLA, but that doesn't mean that we can't enjoy the near carnage. Batman v Superman: Dawn of Justice debuts in theaters on March 25, 2016.