Less is more with new 'Inside Out' cut 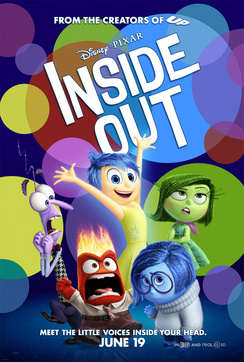 The nice thing about having a few extra days off for the holidays is that I am able to catch up on a few films. One of the six movies that I've watched over the holiday break was Inside Out. Yesterday, my wife and I were able to watch it with our kids and we both had different reactions to it.

I enjoyed it and thought it was cute, but not among Pixar's best offerings. My wife loved it and got emotional during a few scenes. I thought the comedy in the "Inside" scenes took away from the emotional impact of the main story and at times (e.g. the Dad and Mom's internal scenes over the dinner fight) downright trifling and reinforcing stereotypes (men only care about sports and women pine for the ideal romance novel leading man).

It was good and I can see how our psychologist friends find it very useful in explaining abstract constructs to their young charges, but as an adult with a degree in psychology, I was a bit offended at times to be honest. While I understand that it's an animated film aimed at children and some things have to be watered down, the idea that emotions are the drivers in creating personality is a bit too simplistic to me.

Say what you will about Paul Ekman's theories of universal emotion types, but I have some reservations about the concept of basic emotions being hard-wired in the brain. I think it downplays some of the research being done with different cultures and the experiential effect on emotions. Again though, this is getting beyond the simple idea heavily borrowed from Ekman that works well for the film.

Thankfully, Jordan Hanzon created an edit that took out all of the "Inside" moments leaving 15 minutes of footage that proves, to me at least, that Pixar is still the best at creating emotional film moments. I think the true beauty of filmmaking is the connection between the filmmaker and the audience. As part of this connection, I think a great filmmaker allows the audience to fill in certain blanks as he or she sees fit.

Take Inside Out for instance, the whole film leaves you with the impression that core memories and personality archetypes are saved by these nebulous emotions. Emotions are important, but I don't think even the most ardent Ekman disciple would allow that emotions are the driver of an individual's personality.

As it stands from the outside, Inside Out is a film about a young girl trying to cope with a cross-country move where her entire world is flipped upside down. Her parents are stressed out by the move and the pressures of the new job and the young girl is left to her own devices to carve a new life for herself.

She is able to find her niche by relying upon her experience from her former life to build new friendships and experiences. This saving grace is hockey and she is able to use her skills to get accepted in San Francisco. This rings especially true for me because I have used hockey to bond with new people when I moved from Detroit to Indianapolis and again from Indianapolis to Nashville.

The hockey community has been my "in" my whole life and continues to play a role to this day. It has served me much better than all of my emotions out together. If you've seen Inside Out, check out this "Outside" cut below and let us know what you think.

Inside Out: Outside Edition from Jordan Hanzon on Vimeo.