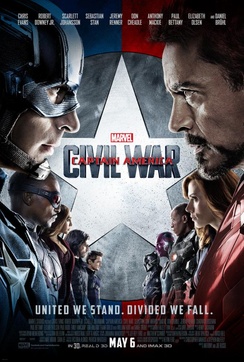 If you bet on Team Iron Man for Spider-Man's allegiance, then pat yourself on the back. Finally, after months of anticipation and speculation, Spider-Man is back home at Marvel and he has a cool new nickname.

Tony Stark calls his new friend "underoos" and it's without a doubt the crowning achievement on a pretty kick ass new trailer for Captain America: Civil War. This film has the weight of a full-fledged Avengers film and that might have something to do with all of the superheroes who show up. There's Black Panther. And is that Ant-Man? Of course, it is.

But the biggest reveal was at the end when Tony Stark invoked his new friend to make his debut in the Marvel Cinematic Universe. The internet is pretty divided over the quick appearance with many people pointing out that he looks completely CGI in this clip. I will admit that he stands out from the rest of the heroes, but there can be any number of reasons for that. It's also possible that the CGI aspects of the suit (see his narrowing eyes and lack of movement in the mouth area when he talks) aren't completely final yet.

Whatever the case, I'm just happy that Spider-Man is back home where he belongs and hopefully this is the start of a new film chapter for the web-slinging wonder. Captain America: Civil War hits theaters on May 6.