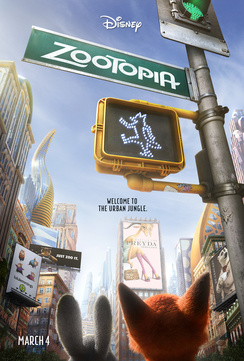 So, it's Monday and that means that it's time for another Mixer. Well, it's usually what that means, until you totally get swamped and miss a week. So, here we are playing catch up.

This weekend was my favorite sports weekend of the year. The first weekend of March Madness is a time that I annually take two days of vacation and lock myself up in my house and experience the Madness. The fact that my wife's alma mater pulled off the biggest shocker when Middle Tennessee State University sent home perennial power Michigan State in the first round.

It's funny, all of that time watching college basketball got me to thinking that movies performing at the box office is a lot like March Madness. You have your favorites that roll ala The Force Awakens and the paper tigers that look good, but disappoint (every Fantastic Four film ever). You have your sleepers that sneak up on you and then you have the filler that completes the lineup so that there are no holes in the calendar.

Whether it's basketball, or movies, or basketball movies, it's all the same. We want to be entertained. For the most part, the reality lives up to the hype, sometimes it blows it away. And then there are the upsets. In fact, this weekend might be considered an upset.

Zootopia dominated the box office for the third weekend in a row, bringing home another $38 million. Without strong family competition, the film should continue to do decent business over the next few weeks, but its run at the top of the box office should be over thanks to Batman v Superman: Dawn of Justice.

While there is great debate still as to what its final number will be, everyone agrees that Batman v Superman: Dawn of Justice will be at the top of the box office at this time next week. The good thing for Zootopia is that it has already zoomed past the $200 million mark and it should have no trouble surpassing $300 million by the end of its run.

The big disappointment this weekend was The Divergent Series: Allegiant. The third film in a three book turned into a four movie franchise suffered a tragic decline from the first two films. Each of the earlier films earned about $50 million in its first weekend, but Allegiant could only muster $29 million in its debut.

The first film made about $150 million, while the second film made $130 million. By extrapolation, Allegiant should end up with $100 million. After this weekend's performance and the onslaught of competition coming, it will be lucky to finish near $80 million. There is still one more film coming in the franchise and how it will perform is anyone's guess. I always thought that the third book was uneven at best, so the fact that they have split it into two films is just incomprehensible to me.

Jennifer Garner's faith film Miracles from Heaven opened right in line with expectations. The film opened early, but has grossed about $19 million so far. The performance is on par with other faith-based films, but a tad shy of 2014's Heaven is for Real's $22.5 million opening.

Miracles from Heaven will have good legs and should finish with about $75 million. With Easter coming up this Sunday, this film is positioned to be a strong counter-programming alternative to Batman v Superman: Dawn of Justice.

In fourth place, 10 Cloverfield Lane continued its strong performance with another $12.5 frame. The film has earned $45 million and should end up north of $80 million, which pretty much guarantees that J.J. Abrams' little experiment in genre films will continue.

The film is coming out on July 19, 2019, a week after Inhumans, a movie from another of Disney's arms Marvel. I think it's a good bet that Inhumans is being moved or pulled altogether. What do you think about the prospects of another Indiana Jones film?

â¤ï¸ Layla: Finn where's Rey? Finn: I don't know, I got beat by kylo and I can't remember anything Layla: okay I'll be your Rey today. Okay? Finn: okay! Lead the way.

This little stormtrooper Daniel had a wonderful wish after seeing the force awakens. Daniel currently lives with a brain tumour and rather than having Finn to himself he wanted Finn to meet the kids at the Royal London hospital and give them some toys. I stayed in character while I was with this brave boy asking him what a car was. He taught Finn about everything earth related! Really thankful for the opportunity this child granted me and I'm just humbled! I hope I played a little part in making you smile young stormtrooper. â¤ï¸â¤ï¸â¤ï¸