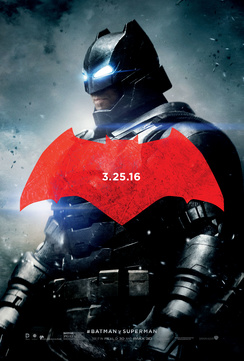 As many of you may have noticed over the weekend, we are now in April. This is crazy to me because it literally feels like we were making our 2016 predictions yesterday. And yet here we are.

I always think of April as the month that we catch our breath before the Summer onslaught. This year is a perfect example as pretty much everyone avoided the wake of Batman v Superman: Dawn of Justice. Just go ahead and look at the films coming out in April.

With the exception of The Jungle Book, there doesn't look to be a real contender in the bunch. Will there be a hidden gem this month? I hope so. Things look pretty tame until Captain America: Civil War opens on May 6.

But, for now, let's review what happened this weekend.

This massive drop has me concerned about Batman v Superman: Dawn of Justice's final numbers. While there won't be much competition in the next coming weeks, it seems that most of the business has been played out for this film and there just isn't the same repeat viewing traffic that other big films have experienced in recent months.

Zootopia continued to rake in the family-friendly business with another $20 million, bringing its total to $275 million and counting. With minimal drops the next couple of weeks, the film should have no trouble finishing over $350 million. The real competition will come in two weeks when fellow Disney film The Jungle Book opens.

God's Not Dead 2 opened a bit lower than its predecessor with $8.1 million in fourth place. It did edge out fellow faith-based film Miracles from Heaven, but its failure to resonate with its core audience so close to Easter might signal a bumpy road for any potential third installment in the franchise.

The week's other newcomer, the spoof film Meet the Blacks, never got out of the gate finishing in eighth place with $4 million. While I would love nothing more than to pile on the film and signal the end of these cheesy spoof films, the main reason for its dampened box office numbers probably lies in the fact that the studio really didn't put much marketing behind it. That said, Meet the Blacks will struggle to get to $15 million.

Hey Yankees... you can take your apology and your trophy and shove 'em straight up your Mixer!