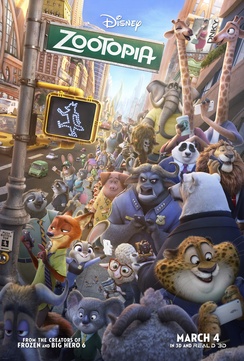 Disney has crafted a long history of talking animals. In fact, you could say that they've built their entire kingdom on the foundation of a talking mouse. And yet, it is still very difficult to get audiences to empathize with anthropomorphic animals.

For children, connecting with these films is a no-brainer as their developing sense of identity is more open to the impossible. As we get older, we find it more difficult to relate with such childish whimsy, and yet, we are a captive audience at the behest of our children who must see this film, or else they will die.

At least that's what they tell me.

So, over the last decade or so, studios have been experimenting, even if subtly, on trying to satisfy both their young audiences and those that have to chaperone them. This is no simple feat and many films have failed to strike the perfect balance. For every Shrek out there, there are countless Mars Needs Moms.

Disney Animation had a massive break-out hit with Frozen and Big Hero 6 was another positive step for them, even if it didn't perform on the same level as Frozen, but really how many animated films can reach such lofty heights? With the exception of Pixar films, I think I can count them on one hand.

With Zootopia, Disney proves that Frozen wasn't a fluke and demonstrate that they have mastered the ability to connect with all four quadrants. As a parent of two toddlers, I couldn't be happier with this news. It means that the next ten years of my life won't be the equivalent of nails on a chalkboard and that I can actually look forward to seeing these films with my kids.

My daughter and I saw Zootopia at the theater, but thanks to this Blu-ray combo pack, I was able to enjoy the film a second time with my younger son and my wife. I'm happy to report that the film held up for both my daughter and myself and it was a big hit for my wife and son.

While I was watching this film again, I was able to pinpoint exactly what I enjoyed most about Zootopia. It was the humanity and compassion that the filmmakers were able to capture through the use of animal surrogates. There are no humans in this film, but it felt more human than many films that feature casts of thousands of real people.

In many ways, Zootopia is the Pinocchio of films for Disney Animation. Just as the protagonist from that film becomes a real boy, this film is able to resonate on emotional levels that few films reach. We can all relate to Judy's struggle to break the glass ceiling of Zootopia and to prove that with enough ambition, anything is possible.

The lessons from Zootopia are reflected in today's society on a daily basis as more barriers fall on an almost daily basis. We live during a wonderful time and while much like in the film, there will always be people who resist change, the inevitable momentum of progress will not be denied.

More than Meets the Eye

If there's one knock on Frozen (other than the number of times my kids request to re-watch it), I would argue that it's the simplicity of the plot. The biggest reason that animated films aimed at kids fail to connect with adults is that their plots are simple. There's no reason to invest in the film because everything is on Front Street and repeat viewings don't reveal much.

Zootopia is different than its predecessors because it boasts a rather robust plot with intrigue layered with mystery. Each viewing of the film reveals a little more and is able to hold the viewer's attention.

Beyond that, the filmmakers have buried so much in the film that it will take many viewings before you even come close to uncovering all of their little presents. Are you a fan of hidden Mickeys? Well, there are so many that even the directors say that they don't know how many are in the film.

If you have an eye for detail, then you will certainly see several homages to Frozen. If you haven't spotted any of the hidden Easter Eggs, don't despair. The filmmakers have included a bonus feature called "Z.P.D. Forensic Files" that will help you get started in finding them.

It's All About the Voices

Whether it's Frozen star Kristen Bell lending her voice to a sloth or Alan Tudyk continuing his bizarre streak of playing "weasels" in Disney Animation films, the real star of the film is the top-notch voice talent.

Ginnifer Goodwin brings Judy Hopps to life and her vibrant personality is larger than life as the bunny with aspirations of being the first bunny cop in Zootopia. Her foil is voiced to perfection by Jason Bateman. As Nick, the sly and wily fox always looking for the next big scheme, Bateman just provides a certain bit of panache and empathy that really helps to sell a particularly emotional scene towards the end of the film.

One of my favorite parts of a Disney combo pack is the abundance of bonus features that are included. It seems that studios have really cut back on the number and breadth of bonus features recently, which is sad. I'm a firm believer that they offer a value add to the physical product and I find them to be interesting and informative.

The process of creating an animated film is unique and they often spend years developing everything from the story to the actual animation. Over the course of those years, there are many decisions made that ultimate affect the final product. For instance, what if the main bad guy was a pig? Yep, it almost happened.

My kids are still too young to fully enjoy the bonus features, but I know that as they get older, they will appreciate them more and more. For now, having both a Blu-ray and a DVD copy in the combo pack is so important. My kids are young and they haven't quite figured out that physical media can't be manhandled like Sid's poor dolls. So, I can keep the Blu-ray version pristine while they can have their own DVD version to "beat up."

The future for Disney Animation is indeed as golden as the touch of their parent studio. With numerous original films set to be released over the next five years, I'm happy that as a parent, I can look forward to actually enjoying these films with my kids as they grow up.

Zootopia is now available on DVD and Blu-ray.