Monday Mixer: 'Madea' is back in a big, bad way 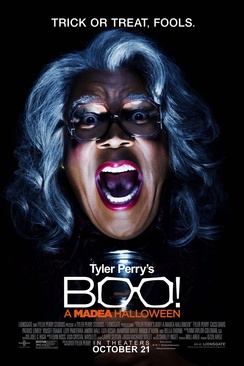 There are some things that truly create a passion.

One of those things is baseball. I grew up outside of Detroit, so I was a de facto Tigers fan and followed my fair share of games over the years. I was nine years old when the Tigers won the World Series. At the time, I didn't realize how rare this accomplishment was for some teams.

It's not like the Tigers have won a bevy of World Series championships, but after 1968 and 1984, it wasn't silly to think that they would bring home a crown every 15 years or so. Thirty two years later, I'm beginning to feel a sense of camaraderie with Cubs fans.

And yes, I realize that comparing a drought of "only" thirty years to the pain and suffering of the Cubs is trite, but it's all relative. After I moved away from Detroit, I didn't follow the Tigers as closely and as the decades started to pass, I found myself tuning in only for the playoffs.

I'm also a diehard fan of the underdog, so I was happy to see the Boston Red Sox end their suffering in 2004. This year's iteration of the Fall Classic presents a conundrum for a fatalist underdog like me. Both the Indians and the Cubs have known their hardship over the years and whoever wins this year's World Series will finally be able to exorcise the ghosts of so many years of middling mediocrity.

And yet, the loser will simply add another chapter to their tales of woe. Which begs the question, which team will draw the most casual fans?

Over the last decade or so, major sports in this country have become tarnished, so this year's World Series offers a chance to cleanse the palate and exorcise some ghosts. I guess it's only fitting that the Series could wrap up right around Halloween.

So, will it be a trick or treat for your team?

What happened this weekend was pretty timely for Halloween. Not only was Boo! A Madea Halloween a film that hoped to trade on the ghosts and ghouls of this time of the year, but this film's performance was a bit of a coming back from the dead for Tyler Perry and his famous on-screen alter ego.

Madea used to be reliable as, well, baseball and apple pie. You could count on a new one each year and the film would debut with about $25 million on its way to $70 million at the box office. In 2013, Tyler Perry's A Madea Christmas hit the pinnacle of diminishing returns with an opening of only $16 million and a total of $52 million.

Tyler Perry gave his character a bit of a breather and started to take on different, more serious roles and it looked like Madea was left for dead. Fast forward to today and it seems that the extra rest worked wonders for Madea. Boo! A Madea Halloween debuted with $27.6 million and looks set to firmly re-establish the Madea brand.

What's even more impressive for Boo! A Madea Halloween is not only its performance, but the films it beat on the way to its opening. In second place, the Tom Cruise vehicle Jack Reacher: Never Go Back opened up with a nice $23 million. The sequel opened up much better than its predecessor, but it will struggle to replicate the first film's legs.

The horror prequel Ouija: Origin of Evil seems to be a better film, but actually opened up with less money. It earned $14 million to Ouija's nearly $20 million. The first film died quickly (no pun intended) at the box office and barely topped $50 million and I see a similar fate here.

It might enjoy some Halloween bump business this weekend, but I still think it will only make about $40 million when it's all said and done. Of course, when you realize that two films based on the cultish board games, is anything really considered a disappointment?

The other wide release this weekend was Keeping Up with the Jonses and Zach Galifianakis' bad run at the box office continued. It only made a measly $5.6 million and looks to only make about $15 million total.