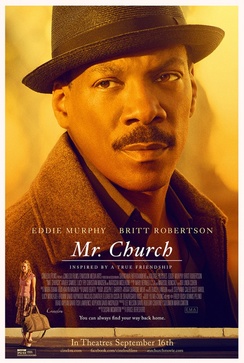 Eddie Murphy is a comic genius that, thanks to questionable parenting, I grew up enjoying and admiring. It's probably not the best example of fine parenting to say that I saw 48 Hrs., Trading Places and Beverly Hills Cop before I turned 10, but it was a different time back then.

Speaking of different times, Eddie's latest film Mr. Church will transport you back in the past to a simpler time before the technology explosion seriously eroded our ability to express compassion for other people. Before emojis, you actually had to go out and perform acts of kindness to express your feelings.

While Eddie is known for his comic wit, his career sort of took a detour when he focused on family films. The problem was that he stopped growing as an actor and became entrenched in a series of films that were basically different takes on the same one-note character. And, if it's possible, Eddie Murphy stopped being funny.

Thankfully, this film is a bit of resurrection for his career as he tackles what is easily his more serious role. That's not to say that there aren't laughs to be had in Mr. Church, but it's definitely a more weighty film dealing with tough issues such as traumatic loss of a loved one via cancer to the struggles of being a single-mom alone in the world.

While Eddie Murphy probably wouldn't be the first person that you would think of to help you navigate through these emotionally treacherous waters, he ends being the perfect Mr. Church in a film that will completely redefine how you see him.

The story arcs over a large swath of Mr. Church's life, but Eddie is much more prepared to carry over the gravitas of age here than he was earlier in his career, say in Life. I'm sure a big reason for this is the experience that actual age affords you. He is able to better emote his character's struggles because he has been through so much more in life now than back in 1999.

The other bright spot in a film whose strength lies in breakthrough performances is young Britt Robertson. It's no secret around her that I have been a big fan of her work for awhile now, but she continues to blow me away with her amazing performances. She displays a great range of emotion here that we haven't seen from her before and her work is only surpassed by the career-defining work turned in by Eddie Murphy.

Considering that these two share the screen for what amounts to 90 percent of the film, they both needed to be at the top of their game boy do they deliver. Mr. Church could have easily overdone it with sap or enter the dreaded movie of the week territory, but they easily skate these potential pitfalls with aplomb.

This film really reminded me of one of my all-time favorite films, Claude Lelouch's Les Miserables. Both films follow the selfless sacrifice of a non-biological paternal figure in a young woman's life. Jean-Paul Belmondo's Henri Fortin would have a lot in common with Mr. Church and Eddie is able to turn in a performance that is truly quite remarkable.

If you're looking for a good heart-tugger that will reaffirm your faith in the human spirit (especially in light of the mud-slinging going around lately), then you need to seek out Mr. Church. It is truly a rare find indeed and one that your local video store clerk would have definitely recommended to you back in the day.

Do yourself a favor and check it out tonight!