Review: Madea is back in a big 'Boo' way 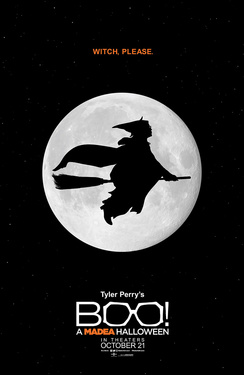 It's funny. Some films are universally beloved, while others seem to play better to a certain audience. Whether it's young or old, male or female, some films just tend to find their water with certain audiences.

I have tried time and again to watch Madea films, but each time I came away frustrated. It seemed that everyone was in on some sort of inside joke but me. It would be easy to simply say that I'm not the intended demographic and move on, but that would be like cheating.

I can appreciate humor, but I just never found any of the previous Madea films all that funny. That's not to say that I didn't appreciate Tyler Perry's genius because he is certainly that and by taking on the writing and directing along with the lead role, he is most definitely the spirit behind Madea.

I also thought that Tyler Perry has done some great work in non-Madea films too. I found his portrayal of Tanner Bolt in Gone Girl to be spot on. There's just something about Madea that rubs me the wrong way.

That is until I sat down to watch Boo! A Madea Halloween. For whatever reason, this film clicked with me.

I'm not sure if it was the horror aspects or homages to countless horror films, but I found myself laughing at a Madea film for the first time. Finally, someone let me in on the joke.

While this film isn't as much of a spoof as say Meet the Blacks, both film tend to go to the same well often. If you liked Meet the Blacks or any of the previous Madea films, then there's a good chance that you will enjoy Boo! A Madea Halloween.

The story is pretty much by the book and easy to predict. They do throw in a bit of a wrench at the end that I found promising and could lead to a future sequel that I might enjoy.

The Blu-ray is a little on the barren side with only a couple of featurettes. I'm sure that Lionsgate knows their audience and packing on a bunch of bonus features probably won't move the needle much, but I, for one, would love to see some deleted scenes or outtakes. It seems that the cast generally enjoys making films together, so I'm sure there is plenty of funny footage just lying around on the cutting room floor.

All in all, this film was a bit of resurgence for Madea at the box office, so I'm sure that we will continue to see new offerings for as long as Tyler Perry is interested in revisiting the character. It's obvious that audiences have an insatiable thirst for her, so if you are in the camp, then this is definitely worth a purchase.