Monday Mixer: 'Kong' is the 'King' of the box office 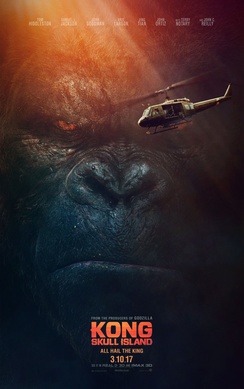 What if we matched each year's films bracket-style for the Oscars? Think back to last year. You have the number seeds of La La Land and Moonlight in first round matchups with Nine Lives or Ben-Hur.

You have the likable upstarts such as The Witch or Hidden Figures that could make a run and pull off a few upsets. And then you have the disappointing blue bloods that lay an egg, I'm looking at you Batman v Superman: Dawn of Justice.

In case you haven't figured it out yet, March Madness is my favorite sports time of the year and I can't wait to tip off the games this week. Naturally, my alma mater Butler gets the early Thursday start, which means that my weekend will either be off to a great or crappy start from the get go.

Sadly, we'll never marry the Oscars with March Madness brackets, but it really makes you wonder what would happen if they did it. I mean, it really can't be any worse than the finish to last month's Oscar awards show. And it might just inject some new life into the Academy Awards.

Well, the good news is that all of the action this weekend wasn't just on the hardwood, one franchise discovered the fountain of youth and it means that more monster movies are almost sure to be heading to cinemas soon.

For the third consecutive weekend, the newcomers outperformed their expectations and it's good news for the box office as a whole. This week, it was Kong: Skull Island that scored the big opening. The film debuted with a nice $61 million and pretty much guarantees that we will see that Godzilla vs. Kong on time in 2020.

While sure, Warner Bros. had dated the monster melee for May 29, 2020 a while back, but you better believe it that they would have pulled the rug out from under it in a flash had Kong: Skull Island bombed this weekend.

With the nice jumpstart to its business, I'm figuring that Kong: Skull Island should reach $200 million before its run is finished. Of course, give that March Madness' audience correlates so perfectly with the target demo of this film, it's quite possible that it will end up on this side of $200 million.

Logan took a bit of a bigger than expected hit in second place with $38 million in its second weekend. With so much overlap in audiences with Kong: Skull Island, the new film's better than expected business had to come from somewhere. The good news is that Logan has surpassed $150 million and is well on its way to a final tally in the $225-250 million range.

The season's biggest winner so far is Get Out and this weekend allowed the film to continue to pad its coffers. With another $10 million, the low-budget horror film has earned over $111 million. Given its $4.5 million budget, the film is destined to become one of the most profitable horror films of all time.

With the sudden resurgence at the box office in March, the 2017 box office is in dead heat with last year's record-setting pace. This is after falling behind last year's performance during the start of the year. It seems that the rest of the Summer is set up for a good run to match, or even exceed last year's numbers.

Usually, I don't post both the International and U.S. trailers as they are typically identical, but with Baby Driver, we really do get two distinct looks at the film.