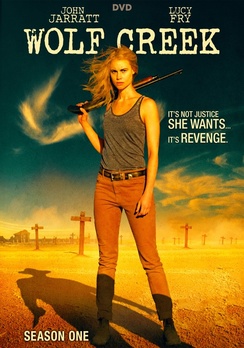 In today's binge-watching society, the episodic approach to storytelling is enjoying quite the renaissance. While this technique works better for some genres than others, horror and suspense stories have long enjoyed success with multi-part stories. Beyond the proliferation of horror sequels, this technique has been successful on TV shows such as The X-Files in which creators are able to unload mythology over several episodes or even seasons.

With the existence of the films, it was a bit shocking at first to see Mick Taylor and the Outback serial killer get a bit of character development. Told over seven episodes, the story is given the room to breathe and it takes full advantage of the format. As opposed to the films, the series introduces a strong female protagonist to be the yin to Mick Taylor's yang and the mythology is much better for it.

John Jarratt was quite impressive playing serial killer Mick in the films but with more time and depth, he elevates Mick to a level of horror villain that is reserved for the greats such as Jason Voorhees or Hannibal Lecter. Oftentimes, taking time to devote storytelling in horror to the killer's backstory is wasted, but it really pays off in Wolf Creek. This added dimension to Mick Taylor makes the inevitable final confrontation with Eve, the teen survivor of one of Mick's earlier attacks, all the more enjoyable.

Speaking of Eve, relative newcomer Lucy Fry is a refreshing breath of fresh air in the typical horror trope of helpless women. The whole dynamic between a male killer and a female survivor is one that usually plays out with the woman getting lucky in her confrontation only to be killed off in the first five minutes of the sequel. I certainly won't spoil the ending of the mini-series, but Lucy brings us a true horror protagonist that we haven't seen since maybe Clarice Starling in The Silence of the Lambs.

I think Wolf Creek will find a receptive audience over here in the United States because the whole concept of an Australian Outback serial killer is a pretty novel one. I'm sure the inevitable U.S. remake will focus on a hillbilly serial killer in the South. Think Jeepers Creepers meets Deliverance. While that is certainly something that I wouldn't mind getting the episodic treatment, the whole foreign aspect of the Aussie Outback is a character in itself and lends itself to the whole creepiness of the series.