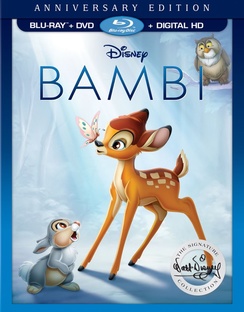 As a boy growing up in the late 1970s, Bambi was my introduction into the world of Disney. Sure, later on, I discovered all of their princess films, but for me, the gateway film was Bambi.

I remember seeing it as clear as day in the movie theater and crying when Bambi's mom is shot (spoiler alert). As a young boy, the lush world that Bambi inhabits was unlike anything else that I had witnessed up until that point and while the coming-of-age story was a bit beyond my grasp at the time, it still resonates with me to this day some 35 years later.

So, you can imagine my excitement when I brought it home the new Signature Collection version to share with my own kids. I have an old DVD version of the film that I did share with my daughter several years ago and she was rather unimpressed. I guess it's the reality of living in a post-Pixar world. Our kids were weaned on Lightning McQueen and WALLâ¢E, so hand-drawn traditional animation, by comparison, looks dated and boring.

I get that, but I'm a strong believer in the power of these original Disney films and their magical stories that can enrapt an audience. So, I sat down with my son who had never seen Bambi before and my daughter and we watched the film as a family.

The result was nothing short of magic. While my kids will sit and watch a whole film the first time through, they are easily distracted and often require multiple viewings to make it through a film. With Bambi, they were actually riveted and interested enough to watch the entire film in one sitting.

I believe that they were caught up in the wonderful storytelling and compelling characters. My daughter loved Flower while my son is a Thumper fan like his old man. Watching this film with them was yet another touchstone that I will cherish as I get older.

There are some other value-added extras such as a brand-new Oswald the Lucky Rabbit short, Africa Before Dark and a Tyrus Wong lithograph that make the investment more palatable, but the real reason you should buy it is that the film simply looks better than it has ever looked before.

They don't specifically come out and advertise a new digital transfer of the film, but in comparing the Diamond Edition blu-ray to this new one, I could see several instances where the film looked crisper and the colors were brighter. I guess there could be deterioration on the Diamond Edition in the last six years, but I'm willing to bet that it is a new transfer.

One reason that leads me to think that is the news earlier this year that Disney is planning to enter the 4K UHD blu-ray fun later this year (finally). Of course, that means that all of those films in the Disney vault will get yet another release in the coming years to bring them all out on 4K UHD.

Almost all of the bonus features from the Diamond Edition are included on this new version, although some of the interactive game stuff that was more popular half a decade ago were left off. Honestly, their exclusion from this version wasn't really noticed and won't be missed by anyone.

Two new features that stood out to me were the features on "The Bambi Effect" and the deleted scene involving the grasshopper. They don't really get into the minutiae behind the decision to excise the grasshopper character, but I'm sure that some consideration was paid to the fact that he looks like a dead ringer for Jiminy Cricket and perhaps they didn't want to cause any confusion.

As to "The Bambi Effect," the feature was informative and yet the way they presented the information, it held my children's attention too. Obviously, early Disney films would have an impact on modern animation, but it's easy to overlook it without a little hint every now and then. It will really make me think about impressionistic backgrounds more when I see other newer animated films.

Overall, the Bambi Signature Collection is a worthy investment, especially if you have young ones around and you want to show them where the animated films that they love today got their start. It truly is the definitive version of the film, at least until they release it on 4K UHD and I'm forced to buy it once again.