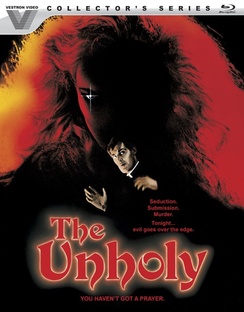 We have written before about the Vestron Collector's Series and how it has given us a fond trip down memory lane with bulked-up versions of the niche video house's classic films. As someone who grew up on the cheese of 1980s horror films, these films have a special place in my heart and I'm giddy that they are finally being given the special feature treatment that they deserve.

You see, most of these films never got a DVD release, let alone the Blu-ray treatment, so these packed offerings from Lionsgate give us horror fanatics the first taste of bonus materials from long ago films that are standard fare today. The Unholy is a perfect example of a film that fans have been desperately waiting to catch up with the technology of today's home entertainment releases.

The Vestron Collector's Series edition of The Unholy is highlighted by an audio commentary from director Camilo Vila and the original ending that I feel is a more interesting way to tie up things, but that might simply be the optics of the passage of time. As is the case with all of the Vestron Collector's Series releases, new featurettes with the cast and crew help to cement the film's cult-like status and provides a bit grounding to reality. Sometimes, we tend to worship these films, but forget that at the time, these films were considered a failure and had real world consequences for those involved.

For instance, Ned Beatty and Hal Holbrook had parts in this film, but instead of helping to reboot their careers, The Unholy was simply in a long line of films that will be mostly forgotten when their body of work is mentioned. This is a shame because I consider The Unholy to be a mash-up of 1970s horror veritÃ© works such as The Exorcist and I Spit On Your Grave with the more far-fetched horror of the late-1980s.

I grew up in a Catholic household, so I have an extra appreciation for films that mine that fertile territory for inspiration. I mean who needs special effects when you see some of the statues and paintings that hang in every Catholic church? As a child, I can pretty much point to these as the inspiration to many of my nightmares and I suppose that is that point.

Fast forward 25 years and compare this film to anything we see weekly on shows such as Supernatural and you start to get an appreciation for what the filmmakers were attempting to accomplish with limited resources. In fact, I'm sure these horror films of the 1980s provide a great deal of inspiration for the show runners of Supernatural. It's great to see these films finally get the recognition they deserve and this Vestron Collector's Series of The Unholy is a welcome addition to this club.