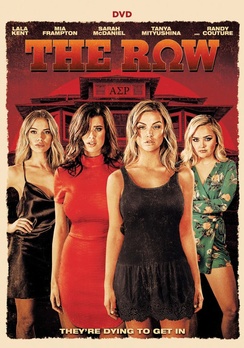 I have a confession to make. You all know that I am a sucker when it comes to slasher horror flicks. Having grown up in the 1980s, it's not hard to figure out why I gravitated towards such horror classics such as Friday the 13th and A Nightmare on Elm Street. These films defined a genre that continues to evolve and persevere to this day.

Of course, not all horror slashers are up to snuff. Considering that I was 10 when A Nightmare on Elm Street debuted in theaters and soon to be in full-swing pubescence, well, let's just say that I became an expert in the cottage industry of sorority slasher flicks.

And I pretty much have seen them all. I'm not sure if that's something that I should be proud of, but I own it. In other words, I have a pretty good base upon which to evaluate The Row which is a modern-day interpretation of a sorority house slasher film.

The film follows two girls, but mostly Riley who is played by reality star Lala Kent (I had to look her up), as they begin their freshmen year at college. They decide to pledge the Phi Lambda sorority and their sisters start to die off one by one.

In that there is plenty of flesh and a high body count, I suppose The Row would qualify as a sorority slasher. However, that doesn't mean that it's any good or that you should expect it to live up to your expectations of this type of film unless you set the bar on the ground.

Maybe I'm getting old (I am), but the EDM soundtrack that accompanies many of the films key moments doesn't really gel with my expectations of a slasher. It's like a millennial got ahold of the script of The Texas Chainsaw Massacre and said 'you know what this movie needs? More Deadmau5!' And yeah, I'm really showing my age now.

Look, I'm all for updating the sorority slasher trope. I think they did that spectacularly with Scream Queens: Season One, even if it was more satire of the genre than an homage. I just didn't think this film competently added anything to the horror legend.

I have nothing against lead Lala Kent, but she might want to stick to her reality show because she stuck out like a sore thumb, which is hard to do on a B-movie horror film. When former MMA fighter Randy Couture is acting circles around you, it's time to think about that fall-back career.

Although to be fair, it's not like the script she was given did her any favors. No, this was an abomination any way you look at it and not only set back horror films 20 years, but perhaps even strong female film leads as well. The one good thing that the movie has going for it is that the box art is quite appealing and certainly conveys a level of competence that the film just does not deliver.

I wish I could say that it was just harmless horror cheesiness, but that would be a disservice to horror films in general. No, they took themselves very seriously, but the results just didn't gel into a cohesive film.

The Row is now available on DVD and Blu-ray.