Review: 'The Evil Dead' is a no brainer on 4K UHD 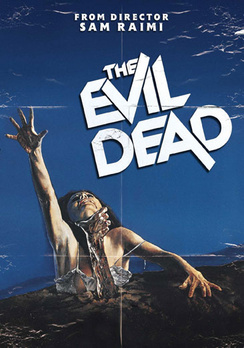 If you read the industry tabloids, they predict that 2019 will be the year that 4K UHD goes mainstream. I tend to trust what I call leading indicators to judge when a new format is ready for primetime.

One of the most convincing leading indicators is when cult films that have no business being re-released on a better format start popping up on the new format. The Evil Dead is precisely the sort of cult film that will properly ring in the new format's acceptance by the masses.

So, with this week's release of The Evil Dead on 4K UHD, I think we can safely assume that 2019 will indeed be the year that this new format will start to take over the world. Cue obscure Pinky and the Brain reference.

The Evil Dead is a horror film from 1981 written and directed by Sam Raimi and starring Bruce Campbell. It is the epitome of a cult hit from the early 1980s horror oeuvre, but the film usually plays second fiddle to its peers like Friday the 13th and A Nightmare on Elm Street. However, I would reckon that if it weren't for The Evil Dead and The Chainsaw Massacre, these later films wouldn't exist.

The Evil Dead is a simple film about five friends who travel from Michigan to Tennessee for a little vacation at a secluded cabin in the woods. Naturally, things quickly get out of hand when the kids accidentally resurrect an ancient evil.

Believe it or not, but The Evil Dead was only Sam Raimi's second film and his budding brilliance was already on display. As those of you that have followed my reviews of the Ash vs. Evil Dead series know, I had never seen The Evil Dead despite being a huge horror fan in the late 1980s. I suppose it had something to do with only being six when The Evil Dead debuted in theaters, but still shame on me for not watching this film sooner.

This review was actually the first time that I sat down and watched the entire film from start to finish. It was certainly interesting to bring both a fresh pair of eyes and an entire lifetime of Evil Dead pop culture to this review. It truly felt as though I had uncovered a long-lost forgotten film shot by an old friend.

In many ways, The Evil Dead was familiar and yet it was also quite different. This first film was more of a traditional horror film devoid mostly of the series' trademark dark humor that would be showcased in future films. Don't get me wrong, there were a few darkly comic moments and absurdities, but the overall feel of the film was late '70s / early '80s horror.

It was also interesting bringing in a lifetime of pop culture references and realizing that many of them could trace their inception to this film. You don't have to look far to see homages to this film in The Cabin in the Woods to The Blair Witch Project and everything in between.

So, does the film hold up? Well, since I had never seen it, I don't know if I'm the right person to answer that question. But I will say that as a representation of this period of horror filmmaking, The Evil Dead is a creepy ride that elicited all of the expected reactions from me at the proper moments.

The one thing that was probably the most enjoyable for me was to see the genesis of the character of Ash Williams by a very young Bruce Campbell. By the time we see him at the end Ash vs. Evil Dead Ash Williams is a confident snarky badass, but here he is untainted by the lifetime evil that will ultimately stalk him for the rest of his life (assumingly). While seeing Ash struggle with dismembering his friends works within the context of the film, it also works on a higher level as we are able to see the fracture in his personality where this is an acceptable thing to do.

Ultimately, The Evil Dead is an unwitting character study in the psychological acceptance of evil in one man. Ash is an anti-hero for the ages, but it's fun to go back (or in my case discover) his reluctant start down this path. It's not hard to see how this film provided the basis for a pop cultural phenomenon that is approaching its fourth decade and showing no signs of slowing down.

The Dolby Vision transfer of the film is very nice and I did compare several select scenes with the Blu-ray to see just how much improvement it provides. The original film was shot on 16mm, so any expectations should be tempered at best. There is still plenty of film grain and other indicators of the period in which the film was shot, but that's sort of the point.

Sure the HDR does provide deeper blacks in the many night scenes in the woods and in the cabin's basement, but there are still plenty of noticeable artifacts that no amount of higher resolution will solve. And would you really want them erased? The Evil Dead was an ultra-low-budget film and it shows in every frame and much like scars on a warrior, the film wears them proudly.

Overall, The Evil Dead has been released on home entertainment a number of times now and this latest version only carries a previously released audio commentary track as its sole bonus feature. So, is it worth the upgrade? It's a no-brainer to own this film on 4K UHD if you haven't bought it yet. It's a classic horror film and should be a staple in any true horror buff's library.

If you own multiple copies already, who are you kidding, you will buy this one too. You won't regret it either as the film truly does look better and the new format availability should ensure that it this version will be future proof for at least a few years.