Review: 'Never Grow Old' is the Western film that we need right now 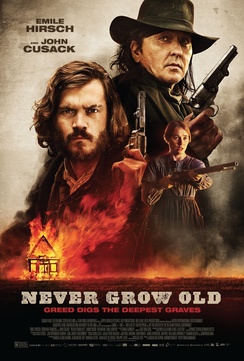 There was an old adage around video stores that Western films always rent. No matter the quality, people just couldn't get enough stories of the Old West and that remains true to this day.

Surprisingly, Hollywood hasn't really tapped into this sweet spot much lately. Sure, there is the odd one here and there, but if you compare the number of Westerns released each year to the number of action or comedy films, they would dwarf the Western numbers.

Of course, some of that is due to market correction when the industry was head-over-heels for cowboys through the 1960s, but then something changed. Now, we are lucky if we get one solid Western film a year in today's market.

Well, let me tell you, this year's solid Western film comes in the form of Never Grow Old.

A peaceful frontier town is taken over by a ruthless outlaw who doesn't waste any time turning it into the seedy den of vice that we have come to expect out of the unruly Old West. Given the increase in violence, the local undertaker's fortunes turn around and he is now faced with a moral dilemma between the blood money and the threats that he and his family now face.

If the rampant success of the TV series Westworld has taught us anything, it's that we have come to romanticize the Old West. We tend to focus on the positive and overlook the disgusting reality that living during these times must have been like. Thankfully, Never Grow Old is here to give us a refresher course.

Thanks to many revisionist Westerns, the true experience of living in the Old West has been mostly lost to history, but it's not hard to imagine that living in such conditions had to be among the most undesirable in the world. The United States was founded by a bunch of religious fanatics intent on imposing their moralistic views on others. The outcasts increasingly found refuge in the frontier lands to the West. And try as they might, the more devout among them usually waged fruitless wars against the wicked.

This is especially true in the town of Garlow, the fictional town on the California Trail that hosts the bloody events of Never Grow Old. At the start of the story, piety is seemingly winning out in town with the local pastor keeping his flock in check, but that doesn't last when Dutch Albert strolls into town.

Before long, Dutch has reopened the saloon and brought back prostitution and other vices to the town of Garlow. Played brilliantly by John Cusack, Dutch is every bit what I envision a true outlaw from the Old West to be. He's not some misunderstood crusading Billy the Kidd. No, he's the guy that will shoot you simply for looking at him at the wrong time.

Dutch immediately enters the conversation for biggest badass in the Old West and I'm hard-pressed to name a more wretched soul. The performance from Cusack is brilliant in its understatedness and he gives the character a menace that few have seen in the genre since Daniel Day-Lewis in There Will Be Blood. Usually, we see John Cusack as the hero or antihero in a comedic role, but it's when he diverts from this safe path that his acting brilliance truly shines through.

Quite simply, he is amazing in this role. His brutality knows no bounds and this uneasy queasiness transcends the entire film. I truly wish that we got to see this side of John Cusack more and who knows maybe we will. It's roles like this that reaffirm my belief that he has an Oscar-winning performance inside him waiting for the right vehicle to come along.

I would be remiss if I didn't also spend an equal amount of time praising the acting chops of Emile Hirsch. His career has also seen its ups and downs, but when he's on, there are few actors better in the business. He is top form as the conflicted undertaker/carpenter Patrick in Garlow.

I should also mention that Never Grow Old features a protagonist role that is often overlooked in many Westerns. The role of the undertaker is usually portrayed as either a gloomy outcast or comic relief. But, I had never taken the time to appreciate the moral conflicts that his profession provides in the context of a time and place where lawlessness is rampant and many die prematurely from a myriad of reasons. In short, when the lead is flying, business is good for the undertaker.

The fact that Dutch and Patrick strike up an uneasy understanding and friendship is chilling when you consider the moral collusion required to make it so. As an Irish Catholic, Patrick was already seen as an outsider to the more Protestant settlers, so where do you draw the line?

I won't get into details and ruin the ending for you, but it's safe to say that Never Grow Old presents a chilling look at what life in the Old West might have actually been like. Too many Westerns get caught up in the romance or the happy ending, but the reality of the matter is that there are far more shades of gray than we admit.

Never Grow Old has plenty of gray and muck for a dozen Western films and I'm willing to bet that if you're looking for a gritty Western, you'll find a winner here. Never Grow Old is now available on Blu-ray and DVD.