Review: 'Midsommar' is a visceral punch to the gut 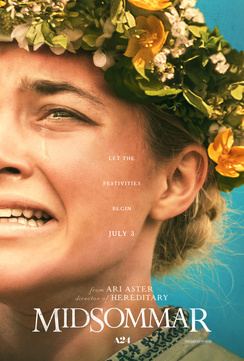 There's no question that Ari Aster is one strange dude. He also happens to be one of the most impressive storytellers shaping the future of horror films. He, along with Jordan Peele and Jason Plum, is pushing the envelope of conventional horror and forcing the audience to redefine their expectations from this genre.

With his first two films, Hereditary and now Midsommar, Ari Aster is quickly establishing himself as the king of what I like to call visceral horror. Back when I wrote about Hereditary, I described this new sub-genre of horror and now I have a name for it: visceral horror.

But here, I'm not referring to the traditional visceral horror films where the images are so graphic and disturbing that they elicit a visceral response, no, these are films that are so twisted that they are able to create that uneasiness simply through the mood or tone of the film. Yes, that's even more disturbing.

Midsommar follows a young couple and their friends who travel over to Sweden for a midsummer festival in a remote village. What starts out as a carefree vacation quickly turns into something sinister when the villagers invite their guests to partake in their sadistic festivities.

As I was watching Midsommar, I felt that different aspects of The Wicker Man and Hostel resonated with me. The pagan rituals from The Wicker Man seem like an inspiration of sorts to those in Midsommar while the vulnerability of travelers in foreign lands from Hostel played strongly as well.

At almost two and a half hours long, Midsommar is the type of film that could very easily drag and lose its audience. Horror films, as a rule, tend to clock in at 90 minutes as that seems to be the optimum attention span and suspension of disbelief for the audience. But I have to tell you, I never once felt as though the running time was a detriment to the film. On the contrary, I was fascinated by the rituals of Pelle's village and wanted to learn more.

If you feel the same way, there is an almost three-hour director's cut of the film, but it did not make its way onto home entertainment - yet. The pacing of the film is such that it adds to the overall creepiness of the effort and ratchets up the tension. You know that you're in for the long haul and just when you think that you are reaching the crescendo, the film takes you to an even more bizarre place.

The lead Dani is played superbly by Florence Pugh who has been in a spattering of films but is mostly known for her TV work in her native Great Britain. Her character is dealing with a personal tragedy and is thrust into a bizarre situation where her grief is challenged by the odd events around her. Meanwhile, her "support" group is lacking which leads to some rather interesting human dilemmas. I'll just leave it there, because it's better to discover them on your own.

An interesting choice made by Aster was to set most of the movie in the stark daylight and midnight sun of Sweden. It not only adds to the absurdity in several scenes, but it also presents horror in a new light (no pun intended). Most horror films rely upon the darkness of night to set the tone and punctuate the terror, but the scary moments in this film happen in the unsettling reality of daylight.

Midsommar is the type of film that will get under your skin and make you uneasy. Most of that comes from the creepiness of the villagers, but a lot of it comes from the unique filming choices of Aster. There's one transition in a bathroom that is so fluid and fun that you'll forget that this is actually only his second film. There's another shot where the camera literally rolls over and the world is upside down for an extended period of time. It really gets the audience out of its comfort zone and sets up the craziness that lies ahead.

Midsommar isn't your traditional slasher horror film, although there is plenty of gore to satiate fans of this type of horror. No, this film really connects on a deep psychological level that forces you to think about the madness long after the credits roll.

I would have to say that Midsommar is my favorite horror film of the year, which is saying a lot. It really strikes fear in a primal way that few horror films are able to do these days. If you're a fan of this new visceral form of horror, then you must add Midsommar to your collection.