Review: 'Toy Story 4' is a high point in an exceptional series 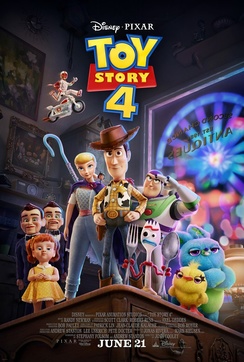 Pixar has always been the gold standard when it comes to animation. The company got things rolling in 1995 with Toy Story and the rest, as they say, is history. While they haven't been shy about making sequels, they have always placed an impetus on telling original stories and only creating sequels when it is appropriate.

The Toy Story films are an exception to the rule though as the audience can't seem to get enough of the lovable toys that spring to life when humans aren't around. In fact, their third film was Toy Story 2 but then they took a long hiatus of over a decade before Toy Story 3 completed the trilogy.

Or at least we thought the story was over, but Pixar had other ideas. Enter Toy Story 4.

Woody, Buzz and the whole gang rally around school project-turned-toy Forky who thinks of himself as trash in an effort to prove to him that he truly is a toy. The toys' new owner Bonnie and her family embark on a road trip and the toys find themselves on an unexpected detour to a carnival where they run into old friends and new obstacles.

The Toy Story films are pretty unique because the first ones came out when before I had kids and I was a father by the time the last two came out. These films are so good that they hit you in different ways depending on where you are on the ride of life.

As a whole, I think the films actually grow up over time much like their intended audience, but as parents, we get a whole new appreciation for their reach to our kids. After Toy Story 3, I didn't really see where they could take the series to provide a meaningful story. Sure, they could keep churning out cash grabs until the cows come home and we would buy them, but Toy Story 4 is anything but a cash grab.

No, the toys are back and some of them are dealing with existential crises that you would think would be out of place in a kids film, but they find a way to make it all work. The hidden magic of Pixar films has been their ability to entertain audiences of all ages. This is especially true in Toy Story 4 where the toys realize that their own mortality is not only at hand but that the very reason for their existence might be askew.

As we get older, the kid inside of us dies a little bit more with each passing year, but the Toy Story films remind us that we can be young forever. They are a semi-decade reminder to live life to the fullest and embrace our inner child, but Toy Story 4 serves as a harbinger of our mortality. To say that Toy Story 4 is the darkest film in the series would be an understatement and Toy Story 3 featured the toys being inches away from being melted out of existence.

And yet, despite being so bleak, it is also the most heartwarming in a warped sort of way. Again, it's the magic of Pixar and I can't describe it, but there's just something about it that makes you smile from your heart outward.

I hate to speculate about the future of the franchise, especially after I was so wrong after Toy Story 3. However, I do hope that they put the toys to rest for good this time because they took a chance and struck gold once, but it will be near impossible to replicate this amazing story. That said, look to see Toy Story 5 in theaters in a few years.