Review: War is bloody and artistic in 'Another Day of Life' 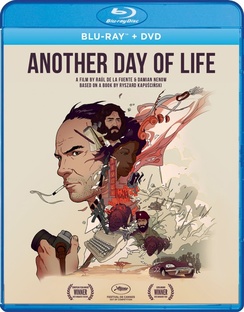 It seems silly to say that war is artistic, but that's exactly what the filmmakers were attempting to create in Another Day of Life. Through the use of blunt, realistic animation, they were able to take Polish war correspondent's Ryszard Kapuscinski treatise on the budding war for independence in Angola in 1975 and give it the emotional resonance that the author intended.

To be fair, I wasn't familiar with Ryszard Kapuscinski's work before watching Another Day of Life and that speaks more for our own literary isolationism than the quality of his work. It's evident from the opening scene that Kapuscinski fancies himself in the mold of American gonzo journalist Hunter S. Thompson, except on the front lines of the latest third world conflict.

Whether he was ever on drugs or not I do not know, but the violent realities that Ryszard Kapuscinski found himself in day after day certainly eroded his grip with reality and the stark animation style of the film does a stellar job of communicating his mental state and how it paralleled the fragile fight for Angolan independence. The movie blends animation with archival footage and interviews to create a surreal and effective telling of the 1975 conflict in Angola that eventually resulted in its independence from Portugal.

Hollywood has done an admirable job in telling "war is hell" stories whether it's Full Metal Jacket or Apocalypse Now or any number of movies about various conflicts over the years. Usually, the point of view of these narratives comes from the soldiers themselves as they live and die on the ground, but Another Day of Life seeks a fresh perspective. The Angolan conflict is told through the eyes of a journalist who realized that simply recounting the action wasn't enough to communicate with his readers the true horror of war.

Ryszard Kapuscinski famously kept two notebooks for each conflict that he covered. One was more straight forward and stuck to the facts while the other one was more esoteric and personal. It was in this second notebook that you have to figure that animator Damian Nenow found his greatest inspiration for the film.

I don't recall any other war documentary that uses as much animation as Another Day of Life to convey its message. Not only was the animation best able to capture the emotional impact of the violence around Kapuscinski, but it gave a bit of a surreal feeling that would be punctuated every now and then with real archival footage or new interviews with survivors.

This intercut of scenes was a real gut-punch and reminder that what we are experiencing is actual history and not the product of some writer's mind in Hollywood. And yet, Kapuscinski isn't without criticism himself, especially about the veracity of his reports.

His style of reporting was known in his native Poland for being reality tinged with fiction. In other words, the journalist felt that he was unable to properly convey the emotions of the story by sticking strictly to the facts. No, the general narrative needed a bit of push to get his readers to feel the weight of his words.

Of course, this sort of journalism is tricky and creates a tightrope situation where the balance between truth and fiction is forever blurred. Also, as we put distance between ourselves and the events being covered, the lines of truth are blurred even further. So, what is truth and what is fiction?

Again, the beautiful part of Another Day of Life is that it uses the animation to convey Kapuscinski's emotional state and the real-life footage and interviews to ground the narrative. No, not everything that Kapuscinski put in the book happened precisely as he described it, but to quote Dickie Dunn from Slap Shot I think he definitely "tried to capture the spirit of the thing."

Another Day of Life is a work of art that really deserves to be seen by as wide of an audience as possible. If you're a fan of war documentaries or even cutting-edge animation, you should definitely check it out. Another Day of Life is a compelling look into a particular moment of the Cold War that they won't ever teach you in your history books, but thankfully we've got a wonderful 85-minute film to give you a glimpse into the hell of war in post-Colonial Africa.

Another Day of Life is now available on Blu-ray from Shout! Factory and GKIDS.