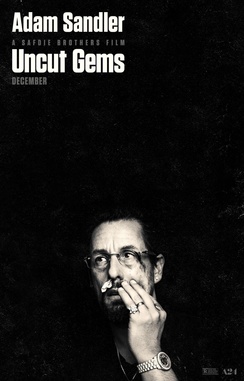 I have to couch this review by stating that I am far from the biggest Adam Sandler fan. In fact, it's probably been a decade or two since I have been able to stomach one of his movies without turning it off early.

And yet, like an overly trusty friend, I was smitten by the positive reviews like the unwitting sailor to his untimely demise by the song of the sirens. I mean, the cacophony of glowing praise for Sandler's performance couldn't be wrong, could it?

Sandler stars as Howard Ratner, a charismatic jeweler that places a high-stakes bet that could lead to the windfall of a lifetime. Unfortunately for Howard, he hasn't the best run of luck lately and he's forced to avoid goons out to collect long enough for him to cash the ultimate score.

I will say that whether you love or hate Adam Sandler, there is one scene that everyone can appreciate. It involves Howard getting punched in the nose by one of the aforementioned goons. I mean, who hasn't wanted to punch Sandler in the face from time to time.

While I do contend that Adam Sandler is best as the comical wiseass, he does have the potential for much more. His dramatic turns in Punch-Drunk Love and Funny People have shown the potential that he finally realizes in Uncut Gems.

I was a bit skeptical when people were whispering about him getting an Oscar nomination for his performance, but now I am legitimately as upset as the Sandman himself over his snub. In many ways Uncut Gems is his Jewish Goodfellas and should have been lauded with as many accolades to boot. Yes, he's that good in it.

We never remember the snubs, do we? Years later, we remember all of the winners and maybe some of the losers, but we hardly ever remember those that should have been nominated. I hope that this isn't the case for Uncut Gems. The film and Sandler's performance deserves to be lauded for many years to come.

No one knows what lies ahead for Adam Sandler (other than more brainless Netflix comedies), but one hopes that this movie might be a step in the right direction for his career. I don't think he needs to exclusively become the next Leonardo DiCaprio, but mixing in a serious movie now and then to showcase his range seems like a good plan to me.

Uncut Gems is now available on Blu-ray and DVD.