Review: 'Sonic the Hedgehog' is a surprising fun romp 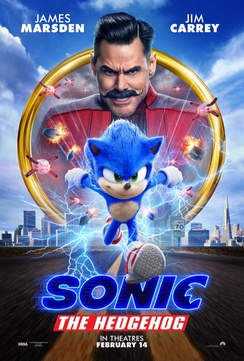 If there is one movie that I was sure that I would hate this year, it is Sonic the Hedgehog. From the first misguided trailer in which a hasty design choice outraged pretty much everyone, the writing was on the wall, but this film wouldn't be denied.

Much like the underdog that Sonic is in his video games, his film persona refused to go down without a fight. A slight release delay so that the filmmakers could redesign the look of Sonic and the pause paid off handsomely.

For all intents and purposes, this hokey money grab playing on a beloved video game shouldn't have worked, but it surprisingly does.

The world's speediest hedgehog takes refuge on planet Earth, but he finds his new existence to be a lonely one. After a series of mishaps with new best friend Tom, he ends up on the radar of the dastardly evil genius Dr. Robotnik. The only thing standing between Dr. Robotnik and total world domination is Sonic, but is he fast enough to save his new home planet?

I went into the review with very modest expectations at best and the movie blew them away. First, my kids were huge fans of it despite not being that familiar with the video game. I, on the other hand, have a plethora of memories of the Sega game and I was skeptical at best for this new live-action cash grab.

And yet, I couldn't stop smiling the entire time. Sonic the Hedgehog was so much better than it ever deserved to be and quickly converted me over to the dark side. The kids were an easy sell, but I was as difficult as they come and yet I still enjoyed it. Surprisingly, the film played an amazing amount of fan service with a bunch of Easter Eggs that super fans will get giddy over.

While James Marsden is the lead, the real scene-stealer is the comic genius that is Jim Carrey. He certainly cut his teeth in comedy before moving on to more serious roles, but it's comedy where he excels and it's refreshing to see him put his comfy pants back on.

That's not to sell James Marsden's performance short because he's perfectly cast as the everyman with just enough whimsy to pull off a police officer with a close encounter with a little blue alien. The script doesn't ask too much heavy lifting from him, but a lesser actor would struggle with the right balance between schmaltz and seriousness.

And yet, most of his screen time is shared with a CGI character, so the level of his craft is even more impressive. Most recently Marsden has been spending time as a robot in Westworld, so he's picked up a thing or two about being less than human.

Unlike most other films coming out lately, Paramount has packed Sonic the Hedgehog with a bunch of goodies. Not only will you find deleted and alternate scenes, but there are featurettes and a commentary with the director and the voice of Sonic himself Ben Schwartz.

While most companies are opting for bare-bones options, it's refreshing to see a packed offering that is as much of a value as it is entertaining. My kids enjoyed all of the bonus features and are eagerly awaiting the inevitable sequel. And I know that I'm usually anti-sequels but I'm eagerly awaiting the next Sonic the Hedgehog movie.

If you're a super-fan of Sonic, put aside your preconceptions and give it a shot. If you've got kids, they will most certainly enjoy the movie and you might even a few points with them. Sonic the Hedgehog is a surprisingly good time and worth the chance.

Sonic the Hedgehog is now available on 4K UHD, Blu-ray and DVD.