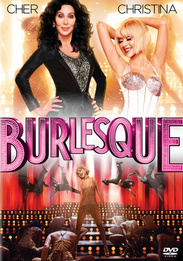 Ali (Christina Aguilera) is a small-town girl with a big voice who escapes hardship and an incertain future to follow her dreams to LA. Ali lands a job as a cocktail waitress at The Burlesque Lounge from Tess (Cher), the club's proprietor and headliner. Soon enough, Ali builds a friendship with a featured dancer (Julianne Hough), finds an enemy in a troubled, jealous performer (Kristen Bell), and garners the affection of Jack (Cam Gigandet), a bartender and fellow musician. With the help of a sharp-witted stage manager (Stanley Tucci) and gender-bending host (Alan Cumming), Ali makes her way from the bar to the stage. Her spectacular voice restores The Burlesque Lounge to its former glory, though not before a charismatic entrepreneur (Eric Dane) arrives with an enticing proposal.