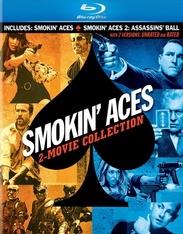 Smokin Aces Slick Las Vegas illusionist Buddy Aces Israel isnt playing nice. Turns out, hes telling mob secrets to the FBI. After $1 million contract is put out on him, Aces tries to pull his greatest disappearing act before a rogues gallery of ex-cons, hit men and smokin hot assassins tries to rub him out in this edgy action comedy that takes no prisoners. Smokin Aces 2: Assassins Ball The director of Smokin Aces and Narc brings you back into the adrenaline-pumping world of blood, bullets and badasses. Packed with insane mercenaries, sexy assassins, and more of the fan-favorite Tremor family, this all-new explosive film tells the story of a low-level FBI agent with a high-price on his head! May the best hit man survive!